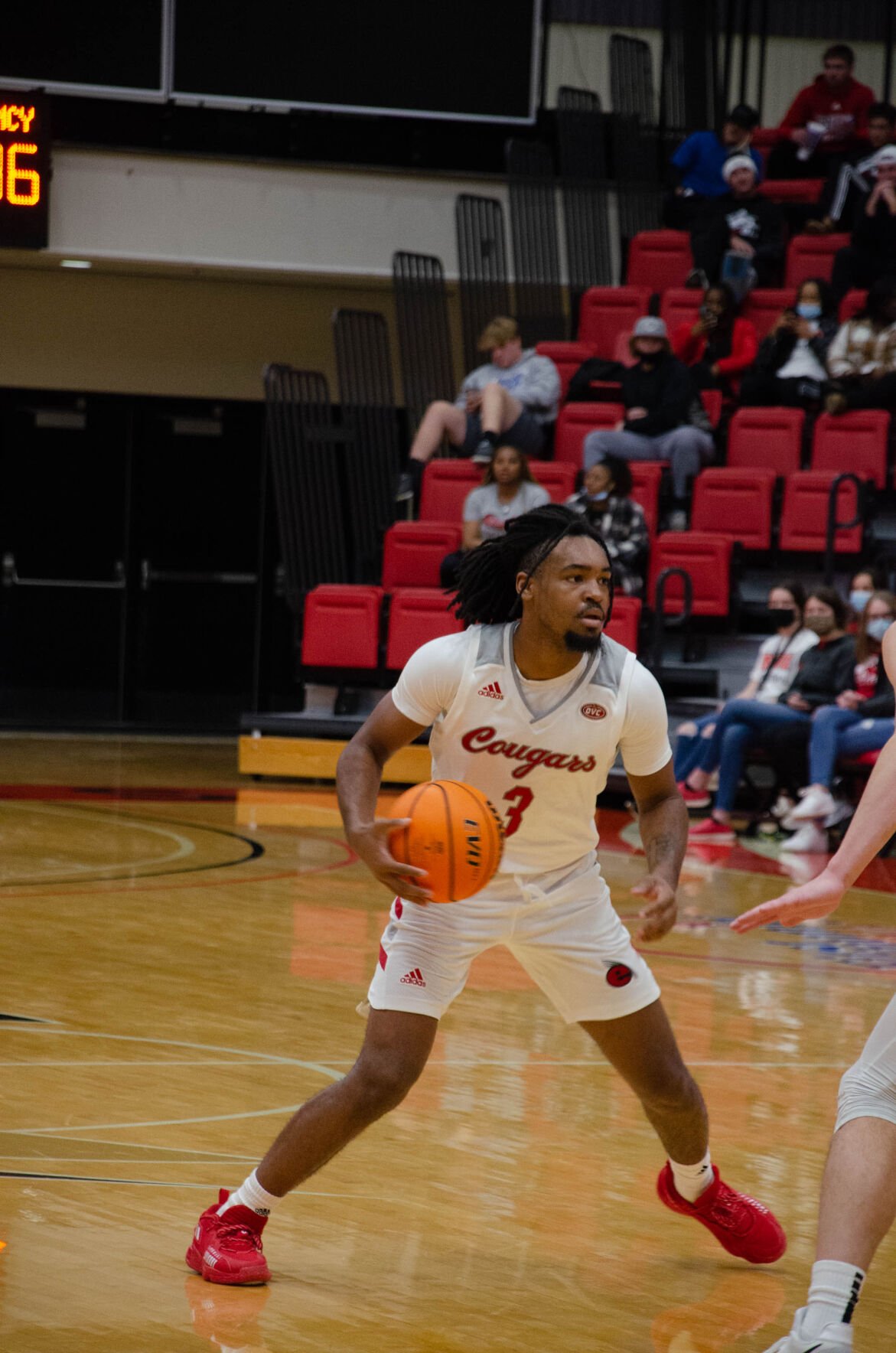 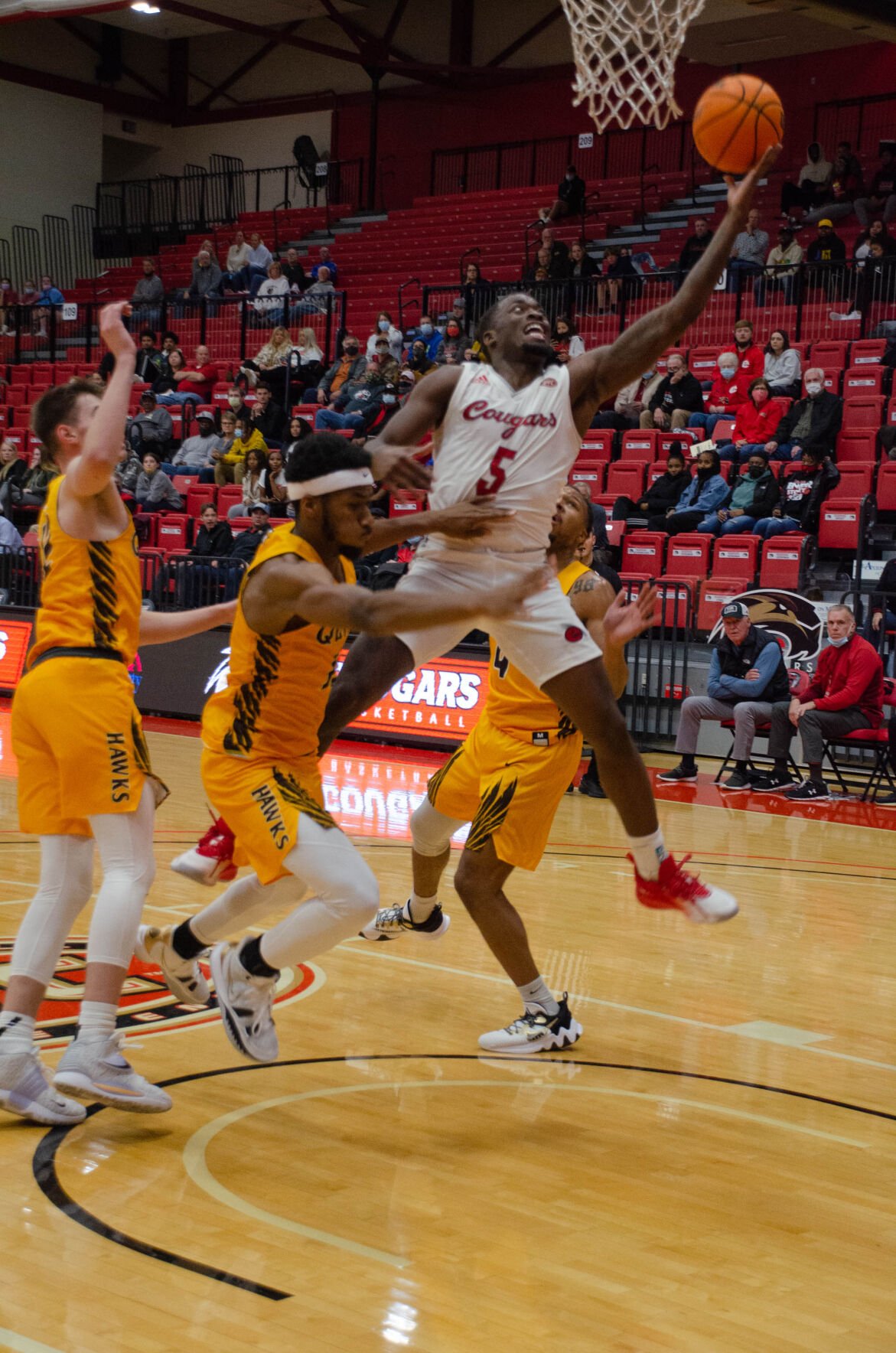 Junior, Carlos Curtis, from Milwaukee, Wisconsin, goes up for a layup against 3 Quincy defenders. 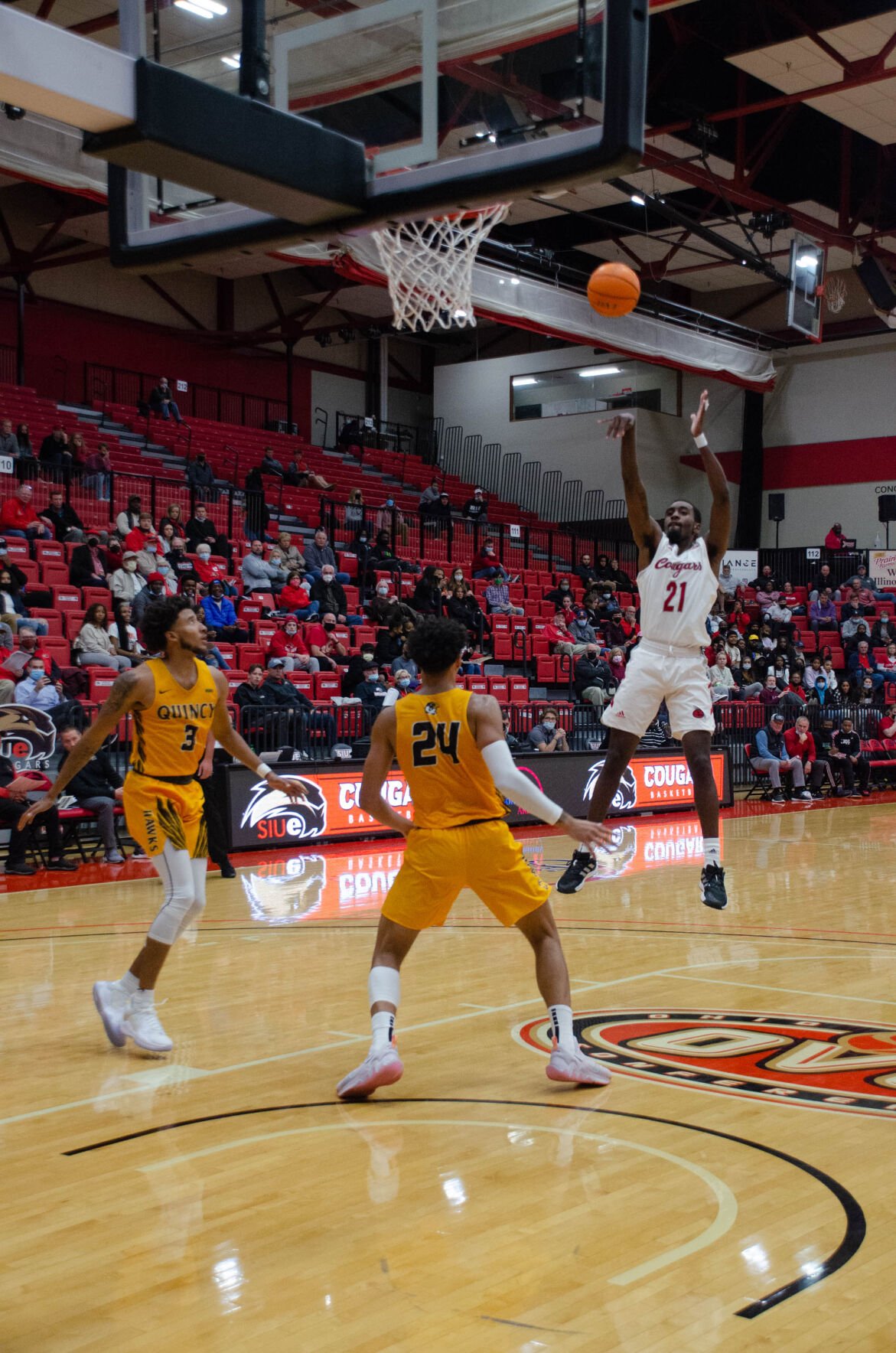 Freshman, Zane Butler of Paragould, Arkansas, goes up for a shot against senior guard Charles Callier (3) of Houston, Texas from Quincy and junior forward Reece Efole (24) of Dublin, Ireland from Quincy.

Junior, Carlos Curtis, from Milwaukee, Wisconsin, goes up for a layup against 3 Quincy defenders.

Freshman, Zane Butler of Paragould, Arkansas, goes up for a shot against senior guard Charles Callier (3) of Houston, Texas from Quincy and junior forward Reece Efole (24) of Dublin, Ireland from Quincy.

Despite a strong first half, men’s basketball faltered in the final half, and suffered  a defeat from Quincy University in an exhibition on Thursday.

In the first two minutes, Quincy scored a basket as well as a 3-pointer, making the opening score 0-5. However, to a three-pointer from redshirt sophomore forward Lamar Wright, and two more baskets from guard Ray’sean Taylor and forward DeJuan Pruitt (both redshirt freshmen), the score was 7-5.

Redshirt junior guard Courtney Carter stood out at 14:08 with a strong block against the Quincy offense. This gave redshirt junior Carlos Curtis a chance to get the ball back to SIUE’s side of the court smoothly.

By 5:15, the score was tied at 21 all, but thanks to a surprisingly far three-pointer from Taylor, SIUE’s lead was retaken. Shortly after, Taylor stopped a shot from Quincy at 3:20.

At halftime, SIUE was ahead by seven points, with the score at 33-26. Other than Quincy starting with a lead, and the score being tied at around five minutes remaining, SIUE proved to maintain a lead during the first half.

Despite a basket from Carter and a three from redshirt sophomore guard Shamar Wright, Quincy kept up, bringing the score to 37-32 by 17:39 in the second half. However, thanks to a strong block by Lamar, Quincy was unable to catch quite as quickly as they may have wanted.

At around fourteen minutes left, Quincy had brought the score to 41-40. Right after this, Taylor scored a basket for the Cougars. Right after this, when the ball was back in Quincy’s half, he nearly immediately took the ball back down the court, and scored a second basket completely unopposed by the Quincy defense. He had brought the score to 45-40, and the crowd was ecstatic as Taylor spun around to dunk the second basket.

With ten minutes left in the game, Quincy took the lead for the second time in the game, with a score of 47-48, and followed it up with another basket, which led the Cougars to call their first timeout of the game at 9:01. After the pause, Quincy scored another two baskets.

This did not discourage the Cougars, as Lamar and Carter both scored baskets shortly after, and Curtis got the team a point at the foul line, bringing the score to 52-54.

The last minute of the game seemed to stretch on endlessly, bringing plenty of tension and excitement from the audience. At 56 seconds remaining, the score was 60-61, and a timeout was called — and then, at 34 seconds, another. With 15 seconds left, Quincy got one point on the foul line, but then at .6 seconds left, SIUE did too, bringing the score to 61-62.

SIUE called a timeout with .3 seconds left on the clock, and the anxiety was palpable. However, the milliseconds remaining were not enough to bring SIUE any baskets. The game ended there, with Quincy winning by one.