Freshman Donshell Beck slaps hands with her teammates in between free throw attempts during a home game against IUPUI on Friday, Dec. 11. 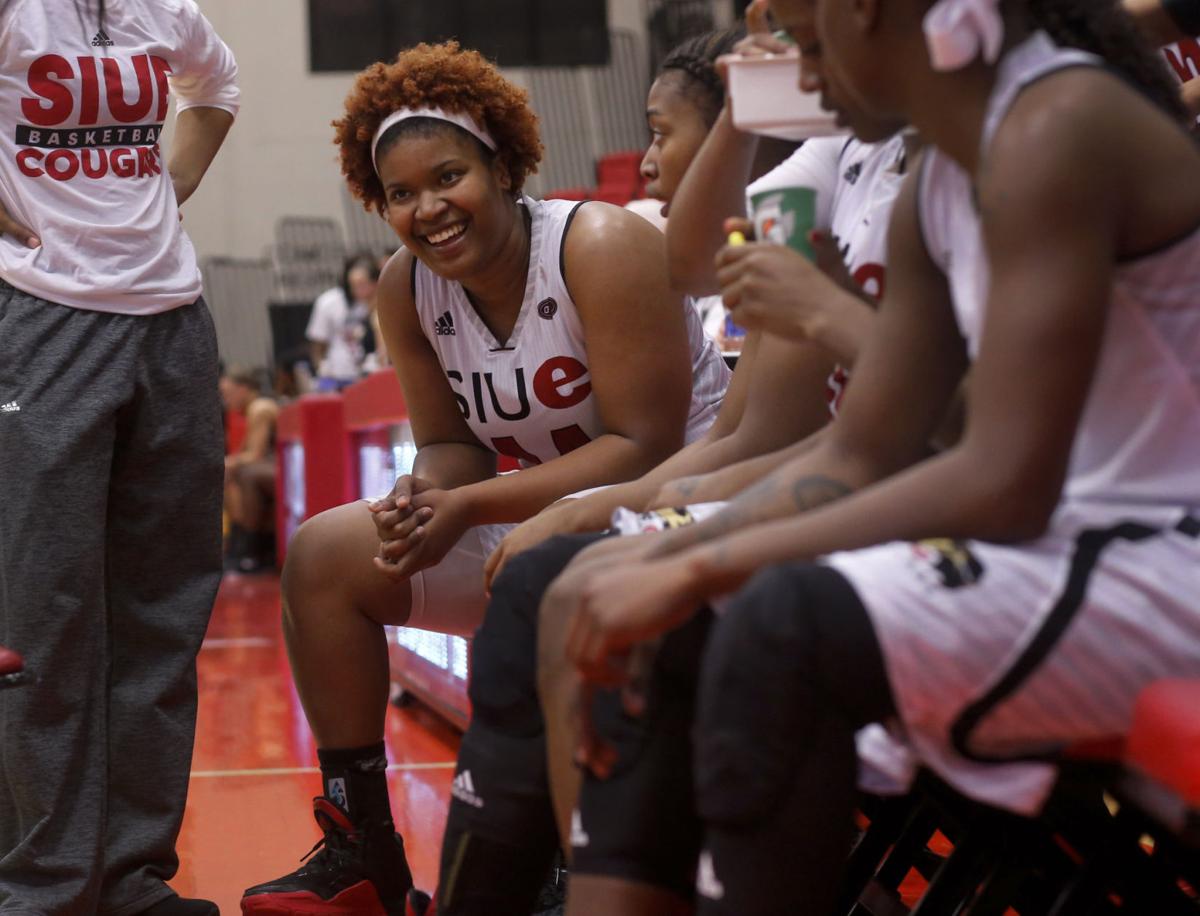 Freshman forward Gwen Adams smiles during a timeout during a home game against IUPUI on Friday, Dec. 11.

Freshman Donshell Beck slaps hands with her teammates in between free throw attempts during a home game against IUPUI on Friday, Dec. 11.

Freshman forward Gwen Adams smiles during a timeout during a home game against IUPUI on Friday, Dec. 11.

The women’s basketball team rallied past the Jacksonville State Gamecocks with a 62-57 win Thursday, Dec. 31 in Jacksonville, Ala.

The Cougars, picked in the preseason as the favorite to win the Ohio Valley Conference, were down by four with less than two minutes, 30 seconds left to play. Strong defense and free-throw shooting allowed the Cougars to score the final nine points of the game and grab their first OVC win.

SIUE was able to hold the Gamecocks 0-3 from the floor and force three turnovers while scoring the game’s final points all from the charity stripe.

As the first two periods of play began to wind down, the Cougars were down 10 points with two minutes, 28 seconds left in the second period. SIUE rallied to close the half with a nine-point streak and headed to the locker room facing just a one-point deficit to the Gamecocks.

In a low-scoring third period, the Cougars were outscored 11-6, but made up for it with a strong 29-point fourth period.

SIUE forced 22 turnovers and converted them to 23 points while also scoring 10 second-chance points.

Head Coach Paula Buscher said she believes many of Jacksonville State’s turnovers can be credited to SIUE guards for their strong late-game defense.

“Lauren White and CoCo Moore can be on a ball-handler and get them frustrated. Whether that pays off early in a game — I can’t tell you it always does — but late in a game I think it paid off with their fatigue and decision-making,” Buscher said.

Butts finished the game with 26 points, nine rebounds and four assists. Sophomore guard Sidney Smith went perfect from behind the arc and ended the game with nine points. Beck also scored eight while pulling down six rebounds for the Cougars.

The Cougars never found themselves trailing in a 83-68 rout of the Tennessee Tech Golden Eagles on Saturday, Jan. 2 at the Hooper Eblen Center in Cookeville, Tenn.

The Cougars won their second straight OVC conference game and now sit at 2-0 in the conference and 7-8 overall.

Buscher said she was happy with the team’s performance in every aspect.

“This was a total win. We had production out of every single player on the court and on the bench. They stayed together tremendously as a team in a little bit of an adverse situation at times,” Buscher said.

At the half, the Cougars were ahead 42-35 off a 12-point, four-rebound and three-assist performance from Butts, who was recently selected as OVC Preseason Player of the Year. Senior guard Erin Kelley added six points and a rebound, while Smith was 3-4 from beyond the arc and finished with nine points on the half.

The second half was all SIUE, as it finished the game with a 15-point win over the Golden Eagles. Butts finished with 26 points, seven rebounds and six assists. Beck finished with eight points, Smith with 14 points and sophomore center Gwen Adams finished with 13 points and eight rebounds. Moore led the Cougars with 10 rebounds, and also added six rebounds of her own.

The Cougars continued perfect OVC play with a 73-60 win against the Belmont University Bruins on Tuesday, Jan. 5 to give the Cougars their second straight OVC win.

Butts led all scorers with 32 points, while Adams came off the bench and poured in 18 points in 26 minutes. Redshirt sophomore guard, Lauren White, posted her first double-double with 11 points and 10 rebounds, while also attributing to four of SIUE’s assists.

The Cougars hit the road to take on the Tennessee State Tigers on Saturday, Jan. 9 in a 73-61 loss. It was the Cougars’ first OVC loss, dropping them to 2-1. After TSU jumped out to 21-8 lead, the Cougars were unable to come closer than seven points the remainder of the game.

Four Cougar starters scored in double digits with Butts leading the way. Butts had 18 points, Adams with 14, Smith had 12 and Beck added 10 points to the Cougar’s 61.

SIUE looks to bounce back with a three-game homestead against the Morehead State University Eagles at 5:30 p.m. Thursday, Jan. 14 at the Vadalabene Center.