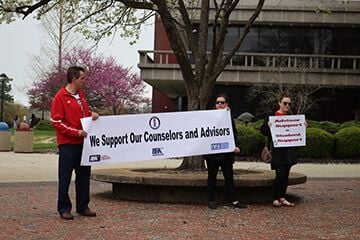 Academic advisers stand in the Quad and chant how many days they have been working without a contract and how many have had to quit in the past year. 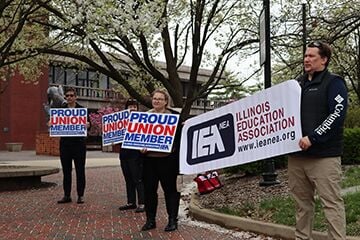 Robert Alford, Danie Dobrinich Johns, Autumn Wetzler and John Cummings hold signs signifying their membership to the Illinois Education Association union, which indicates that advisers shouldn’t have more than 375 students in their caseload.

Academic advisers stand in the Quad and chant how many days they have been working without a contract and how many have had to quit in the past year.

Robert Alford, Danie Dobrinich Johns, Autumn Wetzler and John Cummings hold signs signifying their membership to the Illinois Education Association union, which indicates that advisers shouldn’t have more than 375 students in their caseload.

Dawn Huckelberry, vice president of the Professional Staff Association, said the union contract between the advisers and the university expired July 1, 2021 and negotiations have been slow-moving since then.

Huckelberry said the starting wage for advisers has not changed in a decade and there has been a lot of turnover. The maximum caseload for academic advisers that had previously been negotiated is 375. Huckelberry said there are many who now have 500 students to advise.

“Because we can't offer a fair wage, we've lost a third of our advisers across campus,” Huckelberry said. “So we've lost 13 advisers. They're working an overload. We're truly overworked and underpaid to the point that it's almost logistically impossible to do our job.”

Autumn Wetzler, an adviser in the School of Education, Health and Human Behavior, said her next available appointment is after graduation because she has too many students.

“If students want to meet with me, they have to wait until May when classes could already be beginning.” Wetzler said. “I have over 100 emails I can't answer because I'm in back-to-back appointments.”

Robert Alford, an adviser in the School of Education, Health and Human Behavior, said the advising department is nearing less than 50 percent of its adviser capacity.

“They're starting to have a hard time retaining advisers and recruiting new ones, which puts a lot more pressure on everybody,” Alford said. “So many of these advisers right now have second jobs just to make ends meet. That's ridiculous. Our positions require us to have a master's degree.”

Alford said the large workload impacts students’ ability to get appointments, which can lower their chances of getting a class schedule that fits their needs. He said the lack of adviser availability may make students feel like the university does not care about them.

Tiffany Shemwell, an adviser in the School of Business, said the adviser turnover has had a large impact on the staff that have chosen to stay at SIUE.

“It often feels like we're a training ground where people will then move on to a different position at another university because the pay is higher,” Shemwell said. “Right now there are only two advisers that are working exclusively with undergraduate students in the school and we have around 450 to 475 students.”

Huckelberry said the advising department has tried to hire more advisers, but many of the searches have failed.

“We've invested time and energy and effort into trying to interview candidates to fill these vacancies and nobody wants to work here for what we're offering,” Huckelberry said.

Huckelberry said she cares about her students, but can’t serve them as well as she would like because of the lack of staff.

“We love our jobs and we'd like to do them better, but the situation here … It's working at cross purposes with what we're doing,” Huckelberry said. “We all went to school for almost a decade to learn to do this job, but we can't continue to do it without a sustainable wage and without enough staff.”

Shemwell said students can help their advisers by advocating for them and letting administrators know that if working conditions don’t improve, advisers and their students will be severely impacted.