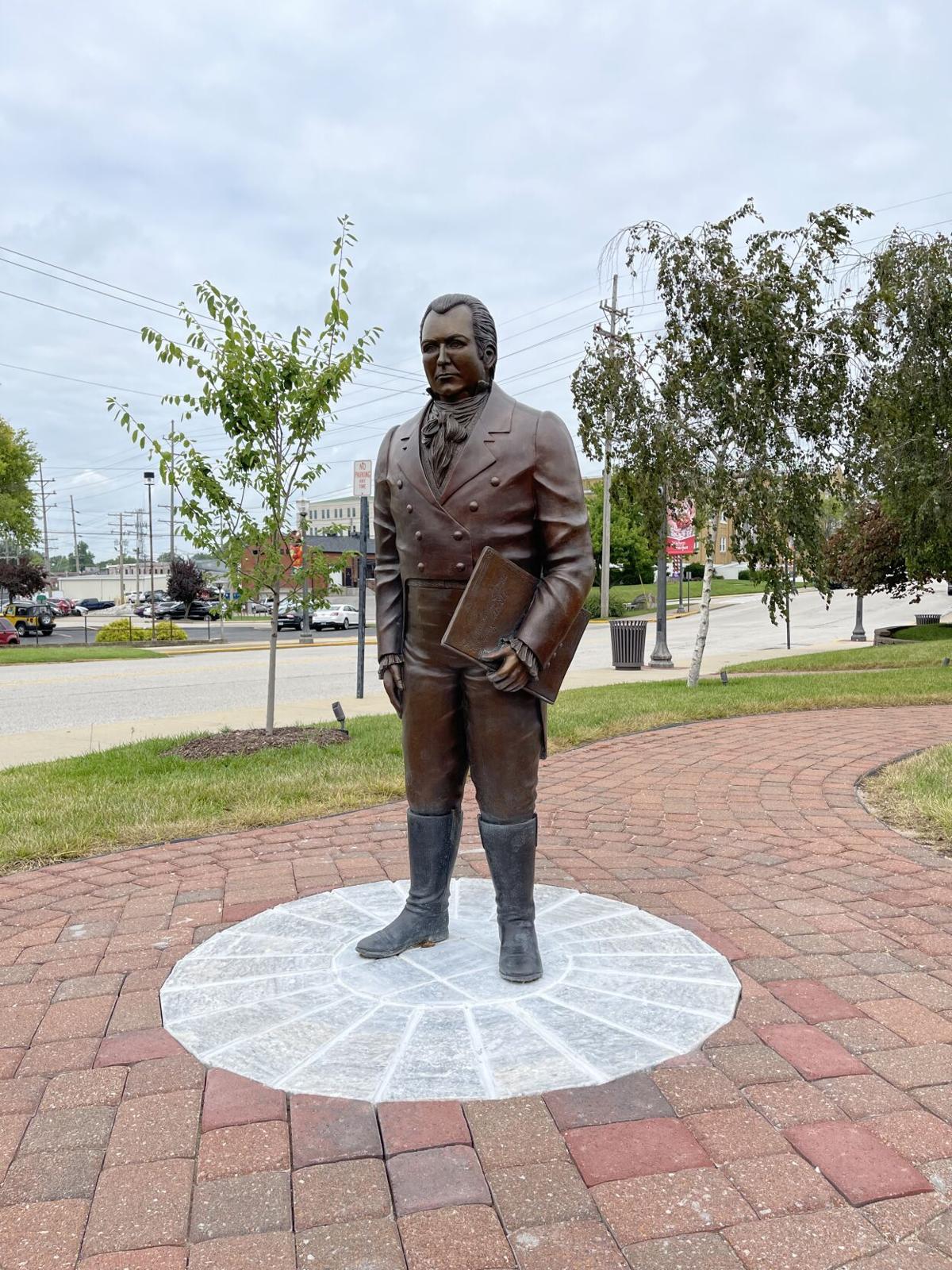 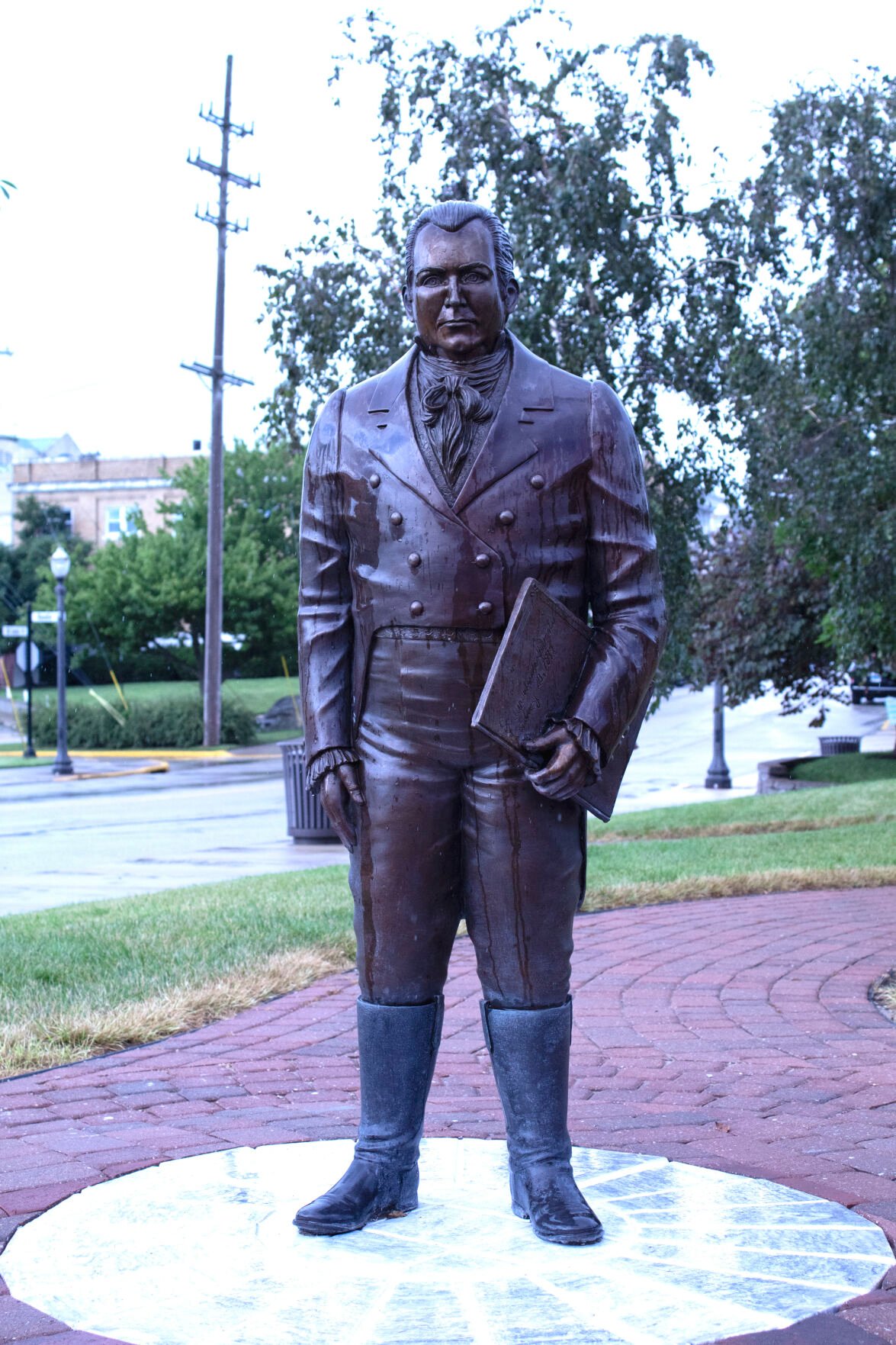 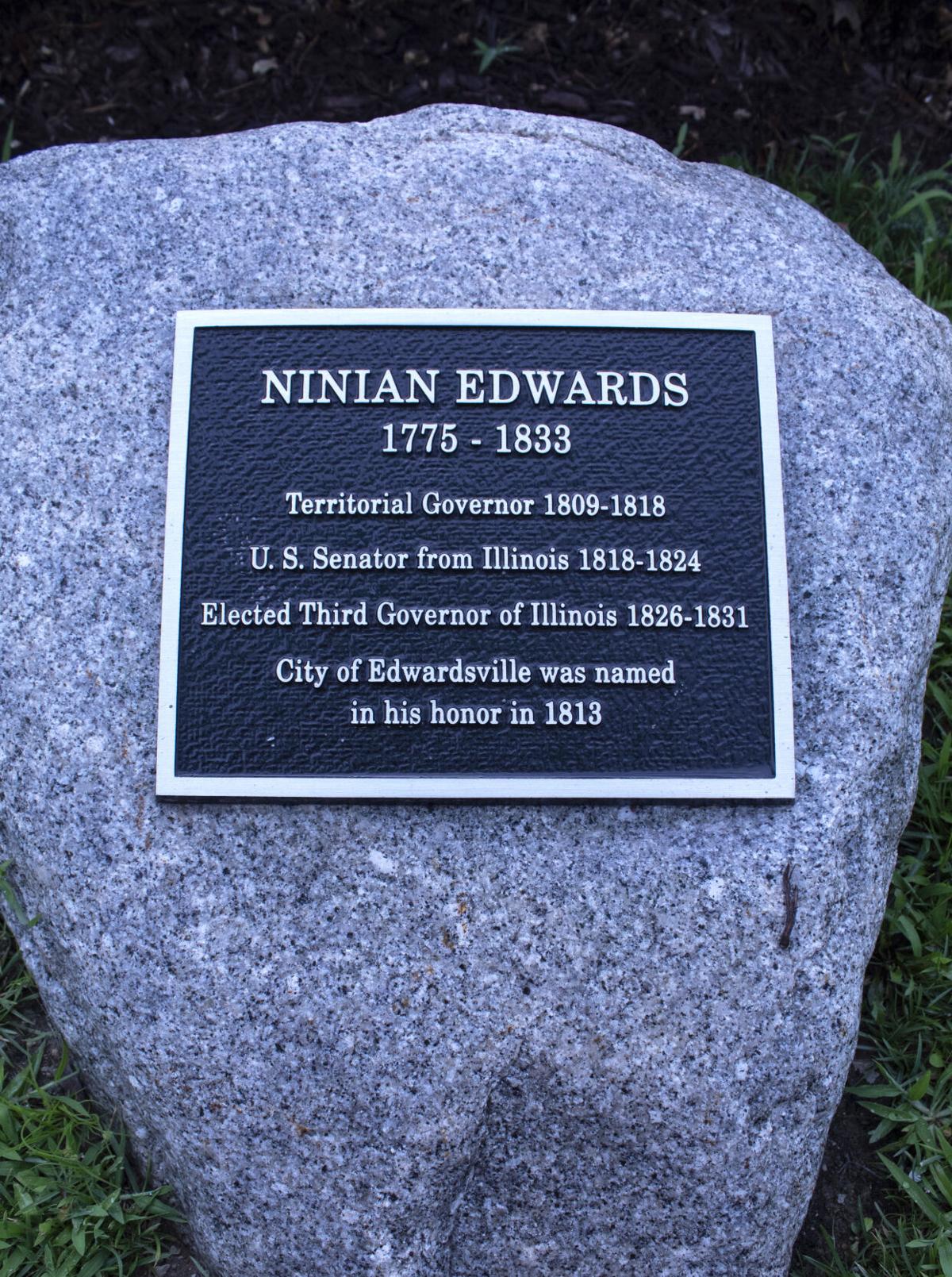 Plaque near Ninian Edwards statue displays a brief history of his accomplishments.

Plaque near Ninian Edwards statue displays a brief history of his accomplishments.

NOTE: The opinions expressed by city council members in this piece are solely representative of those individuals, not on behalf of the entire Edwardsville City Council.

Edwardsville’s most controversial statue was removed from its pedestal late last month, but remains in the newly-renamed downtown plaza. While some hope to display a different side of the Ninian Edwards story at the site, others want his story told somewhere else entirely — though exactly where is unclear.

Ezra Temko, assistant professor of sociology and member of Our Edwardsville — a local group who called for the statue’s removal on the grounds of racism — said he doesn’t think the actions of the city go far enough, partially because their priorities lie elsewhere.

“I don’t think it makes sense, removing the statue to take away the pedestal and then putting it right back. Its location there in the downtown plaza still continues to honor Edwards’s legacy,” Temko said. “I think most people that are on Edwardsville City Council love our community and are interested in making sure the roads don’t have potholes and everything like that, but … I wish that the council would take more bold action that reflects the values that Edwardsville professes about our community.”

Ward 4 Alderman S.J. Morrison said while the statue hasn’t moved much, he thinks it’s ultimately moving in the right direction.

“I think it’s a good first step. Personally, I would like to see it moved to a museum or educational institution where it can be interpreted, and I think it’s more appropriate in a location like that ... rather than in such a prominent place at an entry point into our downtown,” Morrison said. “At a minimum, I was a proponent of removing it from the pedestal — both literally and figuratively taking Ninian Edwards off this pedestal.”

According to Ward 3 Alderman Janet Stack, this was the city’s attempt to listen to all sides of the issue.

Formerly known as “Ninian Edwards Plaza,” Stack said the site of the statue has been renamed “City Plaza.” She said the city will eventually install a complete account of Ninian Edwards’s personal history in the plaza, though it has not yet been determined how this history will be displayed, nor when the installation will take place. According to Stack, part of this history will attempt to paint a more well-rounded picture of Edwards.

“I do think that there’s a side of him that’s not being told. Did he own slaves? Yes. Did he gain more slaves? No. He was the father of a brother-in-law to Abraham Lincoln. I understand that he was working to keep Missouri from becoming a slave state,” Stack said. “Yes, they did kill some indigenous people that were fighting against them in the War of 1812, that had gone to kill settlers, but those that fought with the militia from Illinois were given land. Ninian Edwards helped Benjamin Stephenson actually sign treaties and [gain] more land for the expansion westward with the [Native Americans].”

This is one of many sides to Edwards’s personal history which the city hopes to display in the form of a plaque or lithograph, a move Temko said would be pointless in City Plaza.

“It doesn’t make any sense to add a lithograph at the current site. I mean, the point of a lithograph ... is for people to read it,” Temko said. “It’s not a plaza that’s really used, it’s one that people drive by as they kind of enter and leave the downtown. And so people aren’t going to be reading … people are still just going to see the statue and they won’t interact with the information, so it won’t serve that educational purpose.”

Temko said he and Our Edwardsville are calling for the space to become more welcoming to the community. According to Temko, the first step in achieving this goal is finding a new home for the statue, a process which both Our Edwardsville and some of the city council has taken upon themselves.

“We’ve asked city council members to brainstorm and use their networks, but we hope to do that on our end as well, reaching out to potential sites,” Temko said.

Fred Faust, president of the Madison County Historical Society, said he received a call from Morrison last month asking if the society would be interested in hosting the statue. He brought up the call at their June meeting, setting in motion their standard acquisition process.

“Anytime someone wants to give us something … it goes to our Acquisitions and Ascension committee, and what they do is they evaluate it — ‘Does this fit us,’ ‘Do we want it,’ all those things — and that committee will meet sometime in the [near future],” Faust said.

Morrison said he called the Madison County Historical Society to gauge their interest, seeing it as a logical place for the statue.

“I had heard that the Madison County Historical [Society] did not want the statue, and so I wanted to see if there was any truth to that and find out if not, why not?” Morrison said. “If in fact they would take it, then I think that’s something the council should be presented with as an option.”

“Just because we have something doesn’t mean it gets displayed. Could we put that statue outside because it’s designed to be outside? Yes, we could,” Faust said. “Could we put it in storage with the other things? Yes, we could.”

While a potential new site has yet to be determined, there is no shortage of strong feelings concerning the statue’s possible relocation. Stack said she thinks relocating the statue is a waste of resources which would erase a significant portion of the town’s history.

“Quite frankly, I don’t understand. I mean, I know that [relocation supporters] are upset, but I would like to see them put their energies in things that are more beneficial to those that are considered oppressed,” Stack said. “I feel like sometimes they jumped on the bandwagon trying to do something, and I want it to be more constructive, I want it to be more long-lasting. And I think to move it would get it out of sight, out of mind and then everybody washes their hands and says, ‘Okay, we’re done.’”

“As people learn more about Ninian Edwards’s history, and as they learn more about why people support relocating the statue, more and more people come on board. And there’s certainly people who are dead-set against even the removal of the pedestal, but they’re also against a lot of other values that Edwardsville seeks to have in our community,” Temko said. “I also see a lot of misinformation thrown out there, and a lot of labels like, ‘You’re trying to destroy history,’ or other things that just aren’t true … I think it’s just a matter of continuing to educate the community about Ninian Edwards’s history, and about what statues do and don’t represent.”

Faust said the Madison County Historical Society will have their next meeting on July 15, during which the acquisition committee will make their recommendation to the board of directors, who will cast the deciding vote on whether to accept the statue or not.

The statue was erected in the summer of 2008 — if relocated, it will have spent just 13 years in what is now known as City Plaza. The sculptor, unable to determine Edwards’s actual height, sculpted his bronze likeness at her estimate of five feet six inches tall — now standing on ground level, it towers over far fewer Edwardsville residents.