One student has filed in court and others feel unheard after a no-contact order was issued among several students in SIUE's art therapy department.

Tyson Longhofer is senior legal counsel at Alliance Defending Freedom, an advocacy group that lists its mission as defending religious freedom for Christians. He is representing graduate student in art therapy Maggie DeJong, who was temporarily issued a no-contact order forbidding her from communicating with three other art therapy students.

“After Alliance Defending Freedom sent a letter to the university, we discovered that the university discriminated against Maggie [DeJong] for her religious viewpoint simply because several students complained,” the statement reads. “This is wrong and unconstitutional — universities cannot ban students from speaking to fellow students simply for peacefully expressing their viewpoints.”

DeJong declined to give an interview, but according to a written statement from her, the no-contact order has been rescinded but the damage has already been done.

“Because of these orders, I was unable to fully participate in my classes, go to certain locations on campus when the other students were present and fully take part in the academic program,” the statement reads. “All students should be free to express their viewpoints without fear of retaliation and intimidation, and I hope that the university will never let this happen again.”

“I’m a third-year in the program. We are in the same cohort, we have all the same classes. We have known each other for almost three years now,” Tanner-Pobocik said. “I filed the complaint because I am not a Christian, and [DeJong] has said to me, in the past, and this is what I wrote in the report, … that I am going to hell, that I’m not going to make it when the rapture comes, to the point where I couldn’t speak about religion in class without her jumping down my throat.”

Tanner-Pobocik said her complaint was one of many filed against DeJong. She also said there were some issues with filing the complaint initially.

“We tried first to contact the Center for Student Diversity and Inclusion, and they never got back to us,” Tanner-Pobocik said.

Anna Schulz, graduate student in art therapy, took a groups class in the program with DeJong. During the classes, art therapy students discuss and learn about how diverse groups of individuals with different backgrounds can relate on common issues and deal with conflict.

“I met Maggie at the beginning of my first year [in art therapy], she was a second year at that time. She was nice enough,” Schulz said. “Within [groups class], she appeared several times wearing various Back the Blue-type regalia, specifically Blue Lives Matter.”

“Things began to escalate toward the end of the class, and a lot of comments were made and notions [by DeJong] that implied people of one specific religion, specifically Christianity, have a different moral standing, are holier than, even better than others. While those things weren’t explicitly stated, it was said in a connotation that made me uncomfortable,” Schulz said. “They were microaggressions.”

A Black student told DeJong directly that they were offended and frightened by the Blue Lives Matter organization.

Schulz said DeJong never personally threatened her, but she also said she cannot speak for other members of the department.

“It propagated an environment that makes many individuals, including myself, uncomfortable to be on campus,” Schulz said. “Not because we think she, herself, is going to do anything to us, but more so this overall aura of the potential of being aggressed against based on your identity, which is something our program, the art therapy program, really stands against.”

Tanner-Pobocik said the no-contact order stated that several students in art therapy were not to interact with each other, including DeJong.

“It was a two-sided effect. It wasn’t just that she could not contact us. We were not allowed to contact her,” Tanner-Pobocik said.

Shortly thereafter, DeJong got legal counsel from the ADF.

“She threatened legal action if the school did not rescind the no-contact,” Tanner-Pobocik said. “So, the school rescinded the orders.”

Schulz said many faculty members in art therapy have stated they stand against this form of intolerance, but, with the no-contact order being rescinded, it felt to her as though administration is not standing up.

“I have seen so many professors make a stance, say ‘This will not be tolerated,’” Schulz said. “However, I have seen, additionally, that the administration has not necessarily backed up our professors.”

Tanner-Pobocik also said there has been support for speaking out against these microaggressions from outside the university.

“A good chunk of the program is behind this effort, alumni too,” Tanner-Pobocik said.”‘We started an art protest … where a lot of the program got together and decided the school is not backing us up in the way we need it to, and so we just kind of said they needed to do better. We had a community meeting in the art therapy department, and just talked openly about what was happening and how it was impactful and affecting our learning.”

The art protest was first hung in the art and design building shortly after spring break.

Schulz, among several other of DeJong's classmates,  are concerned about how DeJong expresses her beliefs may impact future clients who do not share those beliefs.

“She has shown characteristics that do not paint an ethical practice,” Schulz said. “I think it’s incredibly inappropriate, the way that the notion of ‘Based on my religious beliefs, as a child of God, XYZ,’ is an excuse for treating people in a frankly abusive manner.”

SIUE administrators, the director of the art therapy program and SIU's legal counsel all declined to comment.

As one of the individuals that was quoted in this article, I would like to clarify an misquotation:

The statement that outward threats have not been made is false. Outward threats have been made, which I stated and then explained my reasoning for my choice to speak about my experience in the art therapy program. The statement that “no threats were outwardly named” came from a conversation about what I have personally witnessed in class. I have also witnessed the pain that “reporting” these threats have caused to others, which is why I did not say any names in relation to the experiences of others. As a white, cis-gendered, heterosexual woman— I have the privilege of moving through the world without people assuming that I am not Christian, and therefore my experience is not the same as a Black student’s experience.

Threats have been made and unfortunately, because they were not made in the presence of others— there is “no [written] proof.”

“Outward threats have not been made in the presence of others, but they have been made outside of the classroom” is a far more accurate statement.

In addition to Black student’s, I know that individuals who hold other minority identity statuses have also felt unsafe — especially individuals who do not fit the ‘status-quo’ such as people of color; those who identify as LGBTQIA+, feminist, non-Christian; and individuals with different nationalities.

I appreciate the diligence and transparency of the all of the Alestle staff for reporting on this story. This misquote was caused by a miscommunication, and is in no way connected to any of my “freedom of speech” concerns. 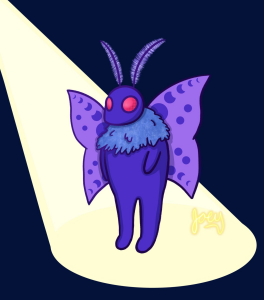 I am proud of the art therapy community for coming together to take a stand against individuals who wish to frame themselves as victims while they are the ones causing harm. Your religious convictions should not be used as a shield against accountability.

SIUE. Where you can pay 20k a year to have your “professor” tell you your blue lives matter t-shirt is “problematic”.

Gotta hand it to this DeJong girl though. The balls it would take to walk into an Art Therapy class at SIUE and make known that you’re Christian is astounding.

The majority of the students in our program are Christian and discuss it openly in and outside of the classroom. The assumption that Maggie is the only open Christian in our program is false.

It's always amazing that we are to tolerate the intolerant who, of course, complain most ironically and hypocritically about intolerance.