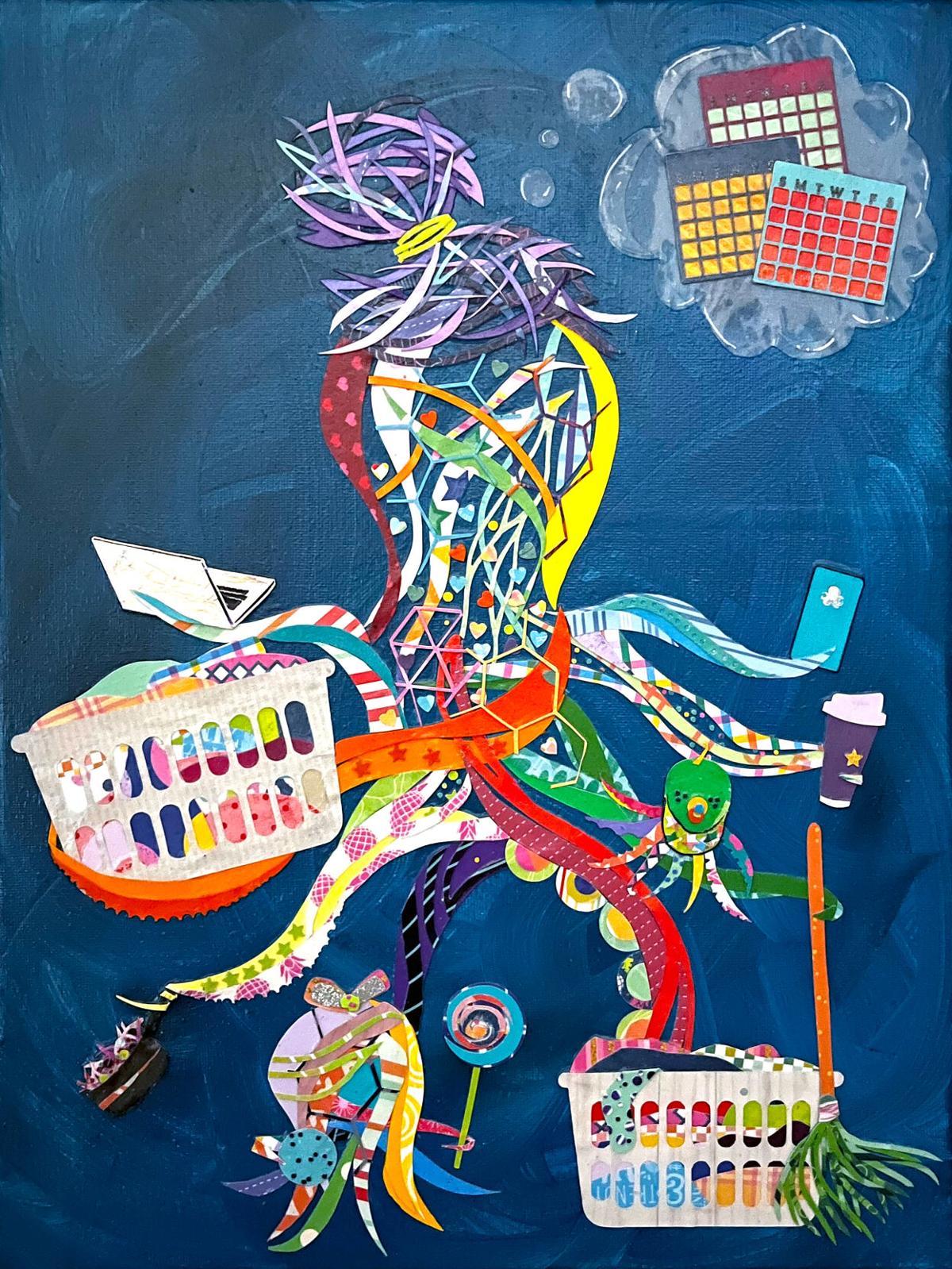 “Octomom” is shown holding her phone because, while some may assume a mother on her phone is simply distracted, she may be scheduling an appointment or Googling the proper dose of medicine for her child. 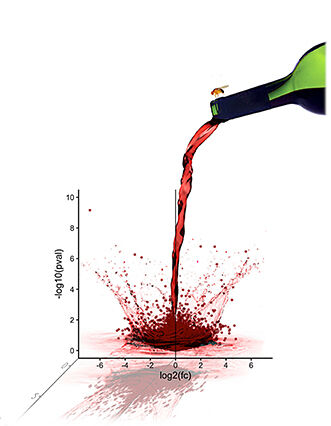 Each “drop” on the graph represents a gene on the fly genome. The fly pictured atop the bottle is meant to draw the viewer’s attention to the fact that the research focuses on flies.

“Octomom” is shown holding her phone because, while some may assume a mother on her phone is simply distracted, she may be scheduling an appointment or Googling the proper dose of medicine for her child.

Each “drop” on the graph represents a gene on the fly genome. The fly pictured atop the bottle is meant to draw the viewer’s attention to the fact that the research focuses on flies.

The Visualizing Research Impacts competition announced its winners — a mixed media piece called “Octomom” that depicts invisible labor, and a graphical representation of splashing wine in which the data points represent genes in the fly genome.

“We made an open-ended questionnaire just asking about the challenges mothers were facing and if they had social support, what things they are responsible for as mothers, that sort of thing. The response was ridiculous. We had like 300 responses in 14 hours,” DeGroot Brown said. “These women needed a place to vent, they wanted to be heard.”

According to DeGroot Brown, she was able to make three separate studies out of the data. The study that inspired “Octomom” is based on the idea of invisible labor, which refers to unpaid and often unnoticed work that is typically delegated to women.

“They are in charge of all the things that make the house run smoothly and you don’t notice it unless they aren’t done,” DeGroot Brown said. “In the piece you can see she’s doing the laundry, balancing the kid. She’s cleaning, but then she’s also thinking about scheduling, and that’s one thing that takes a lot of time and nobody notices or cares unless something’s missed.”

DeGroot Brown said the results weren’t surprising, but someone had to do the research so others can build upon it. She said she wanted her artwork to include laundry, scheduling, holding a baby and a messy bun. She also said she likes using bright colors in her art.

“I just wanted it to be colorful. I mean, it’s strange to assign a race to an octopus anyway, but I want it to be representative of anybody so anybody can see themselves in her,” DeGroot Brown said.

Emily Petruccelli, assistant professor of biology, won best presentation of research impact for “Pouring effects in alcohol research.” Petruccelli said she’s interested in how alcohol can impact molecular signaling, and how that can cause changes in behavior. She looked at whether they change in fruit flies after they’ve been repeatedly intoxicated.

“When I look at my data, I often just see dots and sometimes when it comes to interpretation you have to be a little bit creative, looking at the data. So I thought when I was explaining the data to students, I would mention that this is called a volcano plot and it doesn’t really have anything to do with us studying volcanoes but more like the splashing,” Petruccelli said. “Then that visualized for me the inspiration of the work.”

Petruccelli said she plans to use the prize money to buy a drug that was used in a recent study to treat alcoholic rats and alcohol tissue from humans. She said she hopes to see if the drug will work in flies.

“It actually inhibits one of the proteins that we’re interested in called STAT. So it would be a stat inhibitor, and we think that it’s involved with the creation of addiction-like behavior,” Petruccelli said. “So we’re hoping that in our model, the flies when we feed them this drug, similar to how it worked in the rat model, will see a behavioral change that’s associated with reduced addiction behavior.”

Petruccelli said she is interested in learning which neurons require STAT, but also glial cells, which are about the other half of the cells in our brains that aren’t as often discussed.

“Glial cells are important supporters of neuron help, and so we actually think that might be involved not just in neurons, but also in glial cells,” Petruccelli said.

Susan Morgan, associate dean for research and graduate education, said entries are judged by how well the image represents the research results by themselves.

“We did a Likert scale of one to seven. Then how creative is the image in evaluating, and they have the images and they have the write up that each person provides,” Morgan said. “The ideal is we have an image that doesn’t need that write-up to convey its message.”

Duff Wrobbel, chair of applied communication studies, said displaying research creatively is like watching a funny TV show and realizing that you learned something.

“Art is engaging, and if you’re engaged in it because it’s aesthetically pleasing, but then all of a sudden you go, ‘Damn, that meant something,’” Wrobbel said. “One of the things that all of us in education know is that if I just tell you something, it’s not as impactful as if you come upon that information yourself. So if what you can do is create an artistic experience that gives people an epiphany, then the understanding is much more deep rooted.”

DeGroot Brown said the VRI competition is cool because research isn’t often accessible to people outside of academia.

“We’re in peer-reviewed journals. Those are behind a paywall if you’re not affiliated with the university and a lot of times you read them and you’re like, ‘I don’t even know what they’re saying,’” DeGroot Brown said. “I feel like we should be doing more of that, putting our research in our own words instead of just letting it sit there or hoping that a journalist picks it up and talks about it.”