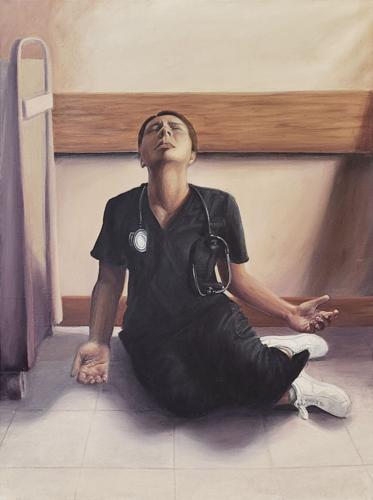 This painting by graduating fine arts and psychology major Alyssa Moore depicts a nurse grieving during the pandemic and is inspired by the Biblical story of Job. 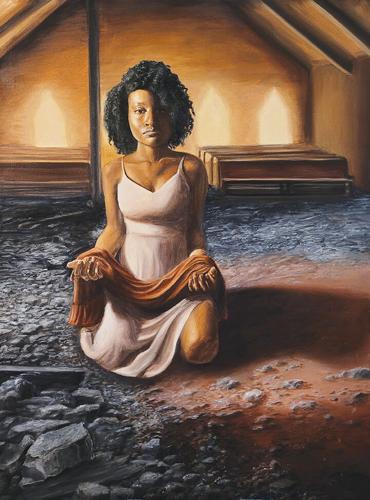 This painting by Alyssa Moore depicts a mother in Nigeria affected by SARS and was inspired by Rachel weeping for her lost children in the Hebrew exile.

This painting by graduating fine arts and psychology major Alyssa Moore depicts a nurse grieving during the pandemic and is inspired by the Biblical story of Job.

This painting by Alyssa Moore depicts a mother in Nigeria affected by SARS and was inspired by Rachel weeping for her lost children in the Hebrew exile.

Alyssa Moore, who graduates this spring with degrees in fine arts and psychology, drew upon her and her friends’ struggles and connected them to Biblical themes to create modern retellings from female perspectives.

Moore, from Beloit, Wisconsin, said she uses the Bible to help her process her emotions and wanted to channel it into her art to represent the feelings of others as well.

“I could point to different passages of Scripture and be like, ‘This is how I feel.’ When I can’t find the words to accurately express or describe how I’m feeling, I can point to that passage and say someone before me has felt this, which is comforting in and of itself and this is how it feels,” Moore said.

Moore said she incorporated stories of her friends and their backgrounds into Biblical examples of grief to find comfort in the fact that people have experienced that grief before, as well as to recontextualize religious information.

“To bring it to the 21st century and also address things that were not really addressed throughout religious history, like giving a voice to women, oppression and things like that,” Moore said. “We talk a lot about our biblical heroes, but we don’t really talk a ton about the people groups who were affected by all of the things that were going on during this date.”

Moore said all three paintings in her series visually reference religious artworks. The first, inspired by Rachel weeping for her lost children in the Hebrew exile, depicts the effects of SARS in Nigeria.

“My friend was telling me all about her family and how in Nigeria it’s being affected by the End SARS movement and everything, and so that was just on the forefront of our minds, the forefront of our hearts and [I] was like, ‘This is a perfect example, or this is a perfect correlation, between what I know is present in biblical text and what I know is present in modern day,’” Moore said.

The second, which depicts the grief of a nurse during the COVID-19 pandemic, references Job, who in the Bible, is a righteous man who is tested by Satan and loses everything, yet remains faithful. Moore’s roommate, Gracelyn Roozenboom, junior nursing major from Washington, Illinois, said she sees patients and different scenarios that are heavy on her conscience, and shares her feelings with Moore when she comes home.

“Sometimes you reach a state where you’re just sad for the patient, you’re sad for the family, you’re sad for yourself because there’s only so much as a nurse that you can do for them. Even if I were a certified doctor, I can’t dictate one’s will to fight,” Roozenboom said.

Roozenboom said she tells Moore what she can about her experience, and expresses the emotions she feels, which can be both happy and sad.

“She doesn’t cast any judgment on you. She creates a very open environment where you can express feelings and she leads you through them. Not because she’s a psychology major, but because she genuinely cares about how you are,” Roozenboom said.

The third painting in the series is a self-portrait titled “My heart is turned to wax,” a passage from the Book of Psalms.

“I struggled with my mental health at times, specifically with depression and so that verse is something that I deeply resonate with at those times,” Moore said. “I feel like it puts into words all of the things that are going on inside, and especially with depression, it’s really difficult to understand what you’re feeling or just to feel in general sometimes.”

Brigham Dimick, chair of the Department of Art and Design, said he first taught Moore two years ago in a 200-level drawing course and was impressed by her talent and capacity to work through challenging visual problems beautifully. Dimick said as a student, she has a love of learning and genuine excitement for her peers’ development that creates a wonderful climate in the classroom.

“She’s somebody who is a devout Christian who’s also kind of exploring both in a reverent way, the foundation of her learning, but also looking at the Bible from a feminist perspective and reimagining these biblical stories seen from a female [point of view],” Dimick said.

After graduation, Moore plans on going to graduate school at SIUE for art therapy. She said she originally wanted to go into neonatal nursing or radiology, but was heartbroken at the idea of pursuing a career that didn’t involve art.

“This is what I want to do because it’s able to combine that art and medical field in psychology, because I’ve always found the human body and mind really fascinating,” Moore said.

Dimick said the theme of lamentation is fitting with her future trajectory as an art therapy counselor.

“Through her own vulnerability and putting forth feelings that are often hidden, she gives the viewer a sense of permission to explore their own sadness and normalizes it,” Dimick said.