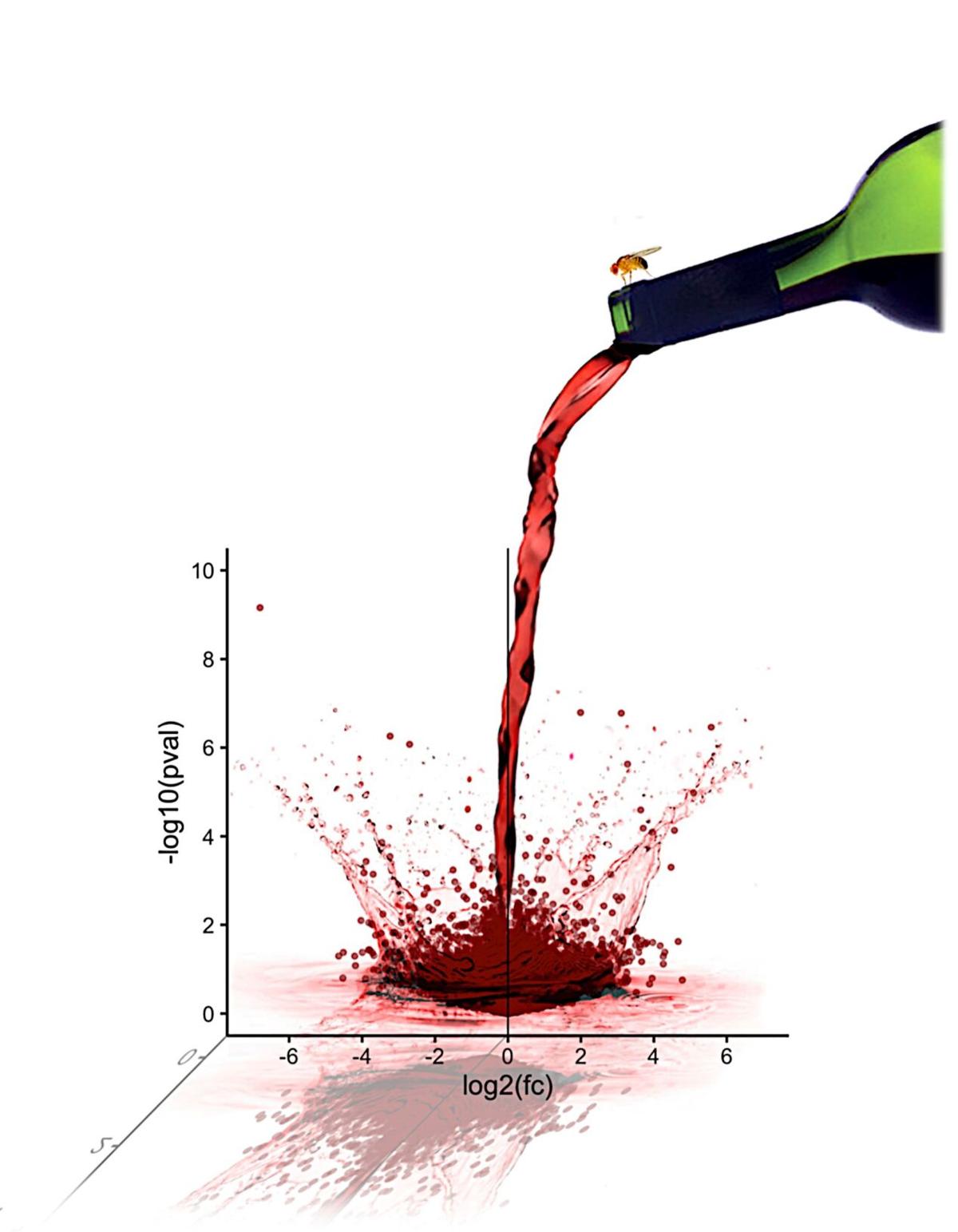 Assitant Biological Science Department Emily Petruccelli has created a graph called a volcano plot which is a common way to show RNA-sequencing results comparing gene expression between control flies and those that got intoxicated. 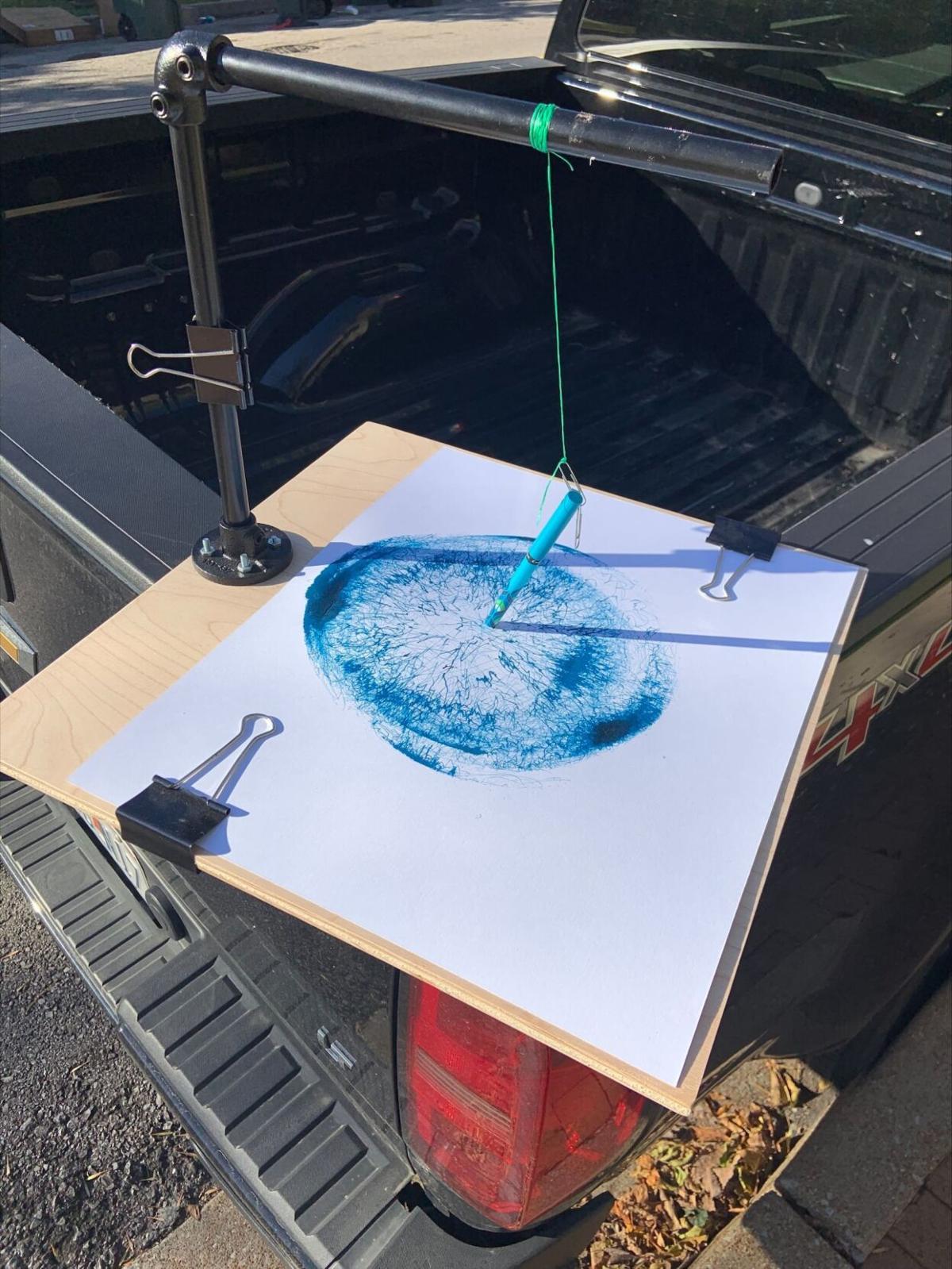 Graphic Design Professor Rodrick Whetstone’s drawing apparatus sits on the back of the truck with a finished drawing.

Assitant Biological Science Department Emily Petruccelli has created a graph called a volcano plot which is a common way to show RNA-sequencing results comparing gene expression between control flies and those that got intoxicated.

Graphic Design Professor Rodrick Whetstone’s drawing apparatus sits on the back of the truck with a finished drawing.

Research projects can be done in labs, outside of the university or even in the classroom as professors use their research to change the way they teach.

Christienne Hinz, an associate history professor, conducts her research in the classroom. She studies pedagogy or the theory behind education. She focuses on gamification or game-based learning in the classroom, using her classes as her study. She has created a game for her world history class in which students play from the start of the class to the end of the semester and then translates the data from the game into a research paper.

“Students begin as [hunter-gathers], and the teams are broken into groups, then they play a range of tabletop games, accounting, broad block building and role-playing games the entire way through the course. They can experience the theories of urbanization, and theories that relate to world history and how you can think about history as the study of all human beings, like the globe is a single unit of analysis,” Hinz said.

Hinz researches how the students are learning through gamification, and publishes her results. It took her seven years to create the game and she has been using it in the classroom for two years. She said her work is important because she is teaching fellow historians about student engagement.

“My job is to teach people how to build educational games. I've thought about teaching carefully for a long time and then have encountered how students have changed over 20 years. They're not the same. What skills [students] bring to the classroom are different,” Hinz said.

Emily Petruccelli, an assistant professor in the Biological Sciences Department, said her research is to get flies drunk. Her research included introducing addiction-like behaviors to flies and then tweaking parts of their brains to help them fight those addictive behaviors.

“I have a focus on flies as models, how their brains [are] obviously not similar at all to mammalian brains, but then when we tweak different aspects of that circuitry, how you can make an addicted fly or something like addiction behavior, and then try to help them, the idea of if you can help a fly overcome addiction, that would be a good first step [to helping humans],” Petruccelli said.

Petruccelli said she works hard to emphasize the importance of students getting research experience as underclassmen, showing students that science fails more often than it works.

“I think there's some mystical aspect of [wanting to join a lab].  I think students tend to feel a little overwhelmed when they go into a research setting because they've only ever been given a protocol. I offer a little bit more outside of the classroom, an opportunity to ask unique questions. Most of [the students] see the failing of science more than everything worked beautifully,” Petruccelli said.

Petruccelli said while the end goal is to publish, her primary focus at the moment is helping students with feasible projects. She said another important part of getting students into labs as an undergrad is showing students what it is like to publish a paper, to take away the mystery of the publication process.

According to Petruccelli, students may have a difficult time understanding that professors are more than just teachers.

“[Students] don't even call me a scientist, they would think I'm a professor. I've never taken a class on teaching,” Petruccelli said. “ I'm a scientist. I know how to teach how I learned. I don't write books or read those textbooks. I look at primary research papers and I write those. The students have no idea. We have other things on our plate.”

Graphic design professor, Rodrick Whetstone, is currently working on a research project based on movement. He has created a series of drawing machines that create markings on paper based on movement. The machines have a marker that hangs by a pendulum and creates marks on the paper when the marker strikes the paper as the apparatuses move. He has several of the drawing apparatuses, one that can be worn as a person walks and another that is meant to sit in a car.

He said he created these machines in response to the racial killings by the police, showing how the killings often happen outside of the victim’s control. He traveled to Minneapolis, Minnesota, this past summer to retrace George Floyd’s last steps. He wasn’t able to trace his exact steps so he commemorated Floyd’s life with the drawing he had made driving to Minneapolis.

“The racist killings, they happen beyond the person's control and the way this machine works, it works beyond control, I've taken autonomy away from it, if I were drawing something, I'd be able to just draw,” Whetstone said. “The pendulum forces [the drawings to] happen, and it's just tossed to and fro.”

Whetstone’s research is important because it is something he is going to eventually implement into his classroom, he said. He said he wants students to know that professors are more than just teachers, that they care about their students.

“I guess [I am a] role model to students, so they can see that we are doing more than just teaching. We do care about them, and that I can speak for myself that I'm active in the community,” Whetstone said. “I want to be a beacon so people can see what it is that I'm doing and they see how important that [research] is.”

Whetstone said he is having a lot of fun doing this research and he can not wait till he can get his research into the classroom but that there is still more work he wants to do with it.