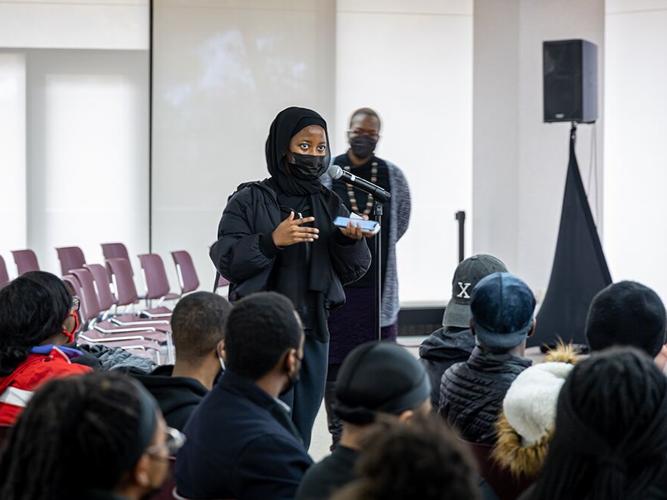 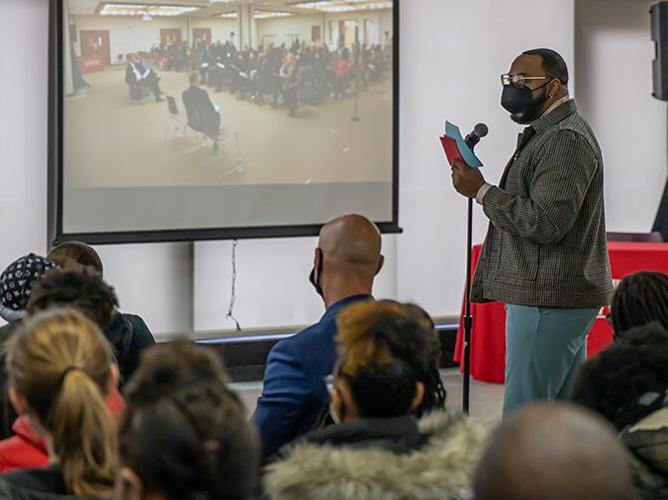 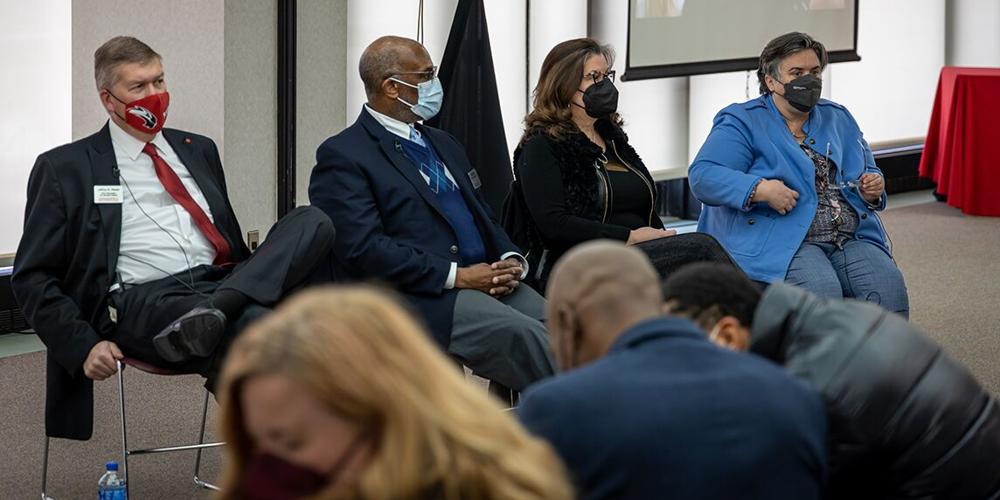 In a town hall on Feb. 23 students, faculty and staff expressed their frustration with administrators and the racism embedded in SIUE as an institution.

The Black Unity Council, a new group representing multiple Black student organizations concerned about racism at SIUE, handed out QR codes that linked to a document of information they compiled, as well as a list of demands for the administration. Some of the demands are disclosures of more information related to bias incidents on campus, changing policies to include more safety measures during investigations and yearly anti-racism training.

Mahlik Good, one of the organizers of the Black Unity Council, said the university exploits Black students for marketing materials, but does not provide enough support to retain them.

“This document … shows how detrimental it has been that the administration curates a culture/climate that supports white fragility and enables anti-Blackness,” Good said. “Furthermore, despite their intentional efforts to market and recruit Black students, contained in this document is some data, which shows that the university is not successful at retaining Black students.”

Robin Hughes, dean of the School of Education, Health and Human Behavior, said the group dressed in all black with clothes resembling those of the 1960s, which helped highlight the purpose of the event.

Good said he works in the Student Affairs office on COVID-19 compliance. He said he was upset by Vice Chancellor for Student Affairs Jeffrey Waple not acknowledging him as one of the Black people who work in his office when Waple talked about changes the department was trying to make during the town hall. He said he was also concerned with Waple’s reaction to the arrival of the Black Unity Council.

“It's a shame that I do not know that you actually support people that look like me and the amount of fear that you had sitting up front when you saw a group of Black students come into this building,” Good said. “And the fear that I have that when I leave this room that I might be retaliated against and fired from the position that I have, because I might upset the university.”

Multiple students, faculty and staff members expressed their concerns over the treatment and safety of Black people on campus.

Sophomore Trey Perkins said he feels unsafe on campus due to racist incidents reported in October and January.

“Right now, not going to lie, I don't feel safe on this campus,” Perkins said. “My mom really had to call me and say, 'Hey, Trey, please look behind you. Please make sure that you walk with somebody at night,' and I don't feel comfortable walking around campus in general. But now even more so because of everything that happened."

Dominic Dorsey, director of ACCESS, said he has seen many situations where the concerns of Black community members weren’t taken seriously.

“I've been in meetings where white tears were prioritized over Black pain and I had my hand slapped,” Dorsey said. “And I've been in other spaces, where we bring up information that we try to put forth in a democratic diplomatic manner and we identify who the individuals are who are problematic to the issue or harming students, instead of being dismissed they're reassigned.”

“We tried to tell you, we showed you. We prostitute our pain and give you our experiences and let you know how much it's deeply hurt us and you say, ‘Thank you for sharing,’” Dorsey said. “We institute trainings and it's a checkmark because people think on what not to get caught doing. But it doesn't prevent them from doing it when people aren't paying attention.”

Junior Jalen White said he feels uncomfortable walking around campus and in some of his classes.

“I walk around this campus all the time and I feel like sometimes I don't belong here,” White said. “Sometimes I'm scared to be in certain groups, because I'm afraid of what I'll hear. I was in classes where they're talking about racist concepts as if it were 1962.”

One student said she doesn’t trust the campus police due to how she was treated when she got into car accidents on campus.

“I'm tired of the police department making me feel as though I'm in the wrong when I'm the victim. I have been in two car accidents on this campus and I was the one being hit,” she said. “And instead of the police saying anything about the smell of my car in the beginning of the incident, he decides to accuse my car of smelling like marijuana after the fact, after the police report is made. One way to show trust is to first show me that you trust me.”

Junior Bryan Robinson said if changes aren’t made, Black students will start transferring to other schools.

“I definitely fear for the attendance rate of Black students here in the future, because I feel like if you don't make these changes soon, you're going to lose us,” Robinson said. “Why would we stay at an institution that isn't progressing swiftly towards a solution that should have been already established?”

Several students talked about being the only Black person in their classes or in their programs. They said the environment made them start doubting their own academic abilities, which a couple described as imposter syndrome.

Moderators asked attendees what came to mind when they heard the term ‘procedural justice.’ Provost Denise Cobb said she hears the lack of trust and acknowledges that SIUE is falling short.

“I think for me, procedural justice means our processes at the end, if they work in the right way, then you would trust the outcome, even if you didn't like it,” Cobb said.

Multiple attendees on Zoom and in person said they associate procedural justice with bureaucracy.

“Procedural justice does create a pile of red tape to weed through in the hopes that justice would be at the bottom of the pile,” one Zoom participant said. “So the question becomes who informs the community of how to navigate the process to find justice here at SIUE?"

Waple said there are revisions to the Student Code of Conduct under development by interim Dean of Students Terrence McTier. He said there would also be more conversations to educate the campus on student conduct investigations in comparison to Title IX investigations.

Thomas Foster, professor of physics, said the university’s system needs to be fixed.

“One of the things I found troubling by the responses from the administration is they kept telling us, ‘We're going to teach you the system,’” Foster said. “But the system is broken. So why aren't our administrators standing up here saying, ‘We need to fix the damn system to reflect the needs of our diverse student population.’”

One graduate student said students don’t have the luxury of being able to say they’re trying, so administration needs to do more.

“What we're getting told today is not enough,” she said. “When we get told, 'Hey, we're trying. We're working on a training,' that's failing, and failing means no degree for me. What does that mean for you all?”

Attendees expressed concern with the lack of consistent communication from administration about bias incidents. Perkins said he was tired of being kept in the dark, as well as other students.

Waple said the administration has learned that they need to get better at communicating.

“We got this incident, we got something out … and then there was nothing,” Waple said. “And we had an opportunity probably to say, here's what's happening, here's the process, here's the procedure. And we have to get better at that in all cases.”

Chancellor James Minor closed out the town hall by telling Black students that they belong at SIUE.

“I am bothered by the fact that just one inkling, that you spent one day here with the idea that you don't belong here,” Minor said. “So I'm here to tell you that you do and you matter to me and walking across that stage to get your degree matters to me.”

Minor said more conversations would follow as SIUE continues its journey to becoming an anti-racist institution.

While the school may have its issues, this town hall was brought on as a response to incident where a report was falsely filed against two students based on their race. Does that not constitute a bias incident? Furthermore, what about the students who were accused and no longer feel safe for the threats they received over the false accusation? Why is it different when it comes to them? I believe everyone should feel safe at their own school, but it seems to me that the fact that the incident that led to this specific town hall was fake has been forgotten.