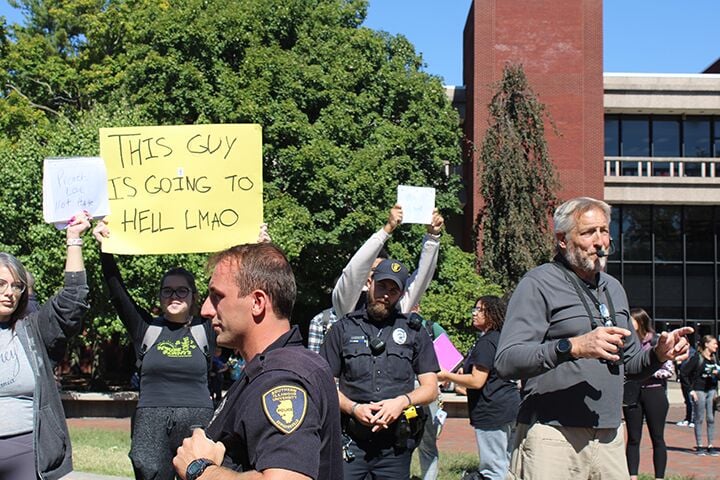 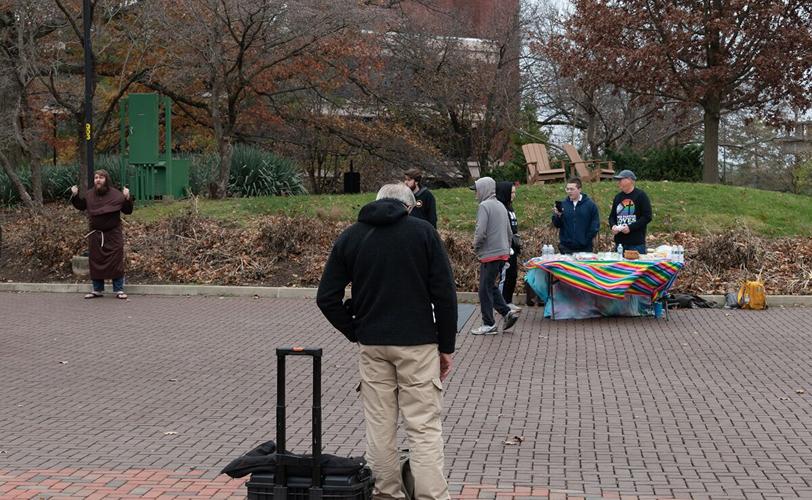 GSA president Stella Smith from Collinsville, Illinois, said after speaking with the other officers in the GSA, it was decided that a bake sale would be an effective and humorous way to undermine Rayborn and make money during his visits.

“The rest of the campus got involved and it just turned into this huge counter programming event, but it really just started out as me wanting to make fun of this guy,” Smith said.

Smith said they try to keep the bake sale as simple and relaxed as possible.

“The main thing that we want to do is keep it relaxed,” Smith said. “We don’t want to make it too complicated because the more complicated you get, the less likely people are to show up in support.”

Willow Slinger, sophomore anthropology major from Mooresville, Illinois, is the historian for the GSA. They said they have seen great support from people since starting the bake sales.

“We have had people donate without even taking any of the baked goods or anything like that, so that’s been like a really comforting thing to see,” Slinger said.

Immanuel United Methodist Church Pastor Dave Roderick said after finding out about Rayborn’s visits, he wanted to find a way to respond peacefully. He was later connected with the GSA to help them with the bake sales.

“It’s interesting to hang out with the GSA, and watch what they do,” Roderick said. “They’re not combative or confrontational at all, they’re just there to say to other students that we see you, we respect you, we’re here for you.”

“It’s interesting to watch how other students provide their own, either very forward or behind the scenes protests,” Roderick said. “Students will find a creative way to do something. That’s something I enjoy about being there.”

Roderick said what he likes about the bake sales is that they’re not only to raise money, but to create a space for individuals to feel safe and gain a secure sense of community.

“It’s about creating that safe space, that awareness that they know that what’s going on could be harmful to them and it gives them a place to connect with people who may need that,” Roderick said.

Roderick said that he feels honored to be invited to participate in the GSA’s bake sales and help create a place that is welcoming, instead of trying to push the belief that one must choose between identity and faith.

“What we want to do is change that narrative, that you don’t have to choose between those two things,” Roderick said. “You can be who God created you to be, and be true to yourself as well, and still follow your faith.”

Smith said they will be continuing their bake sales every Tuesday that Rayborn visits campus.

“As long as he is there, physically, we will be there to meet him,” Smith said.