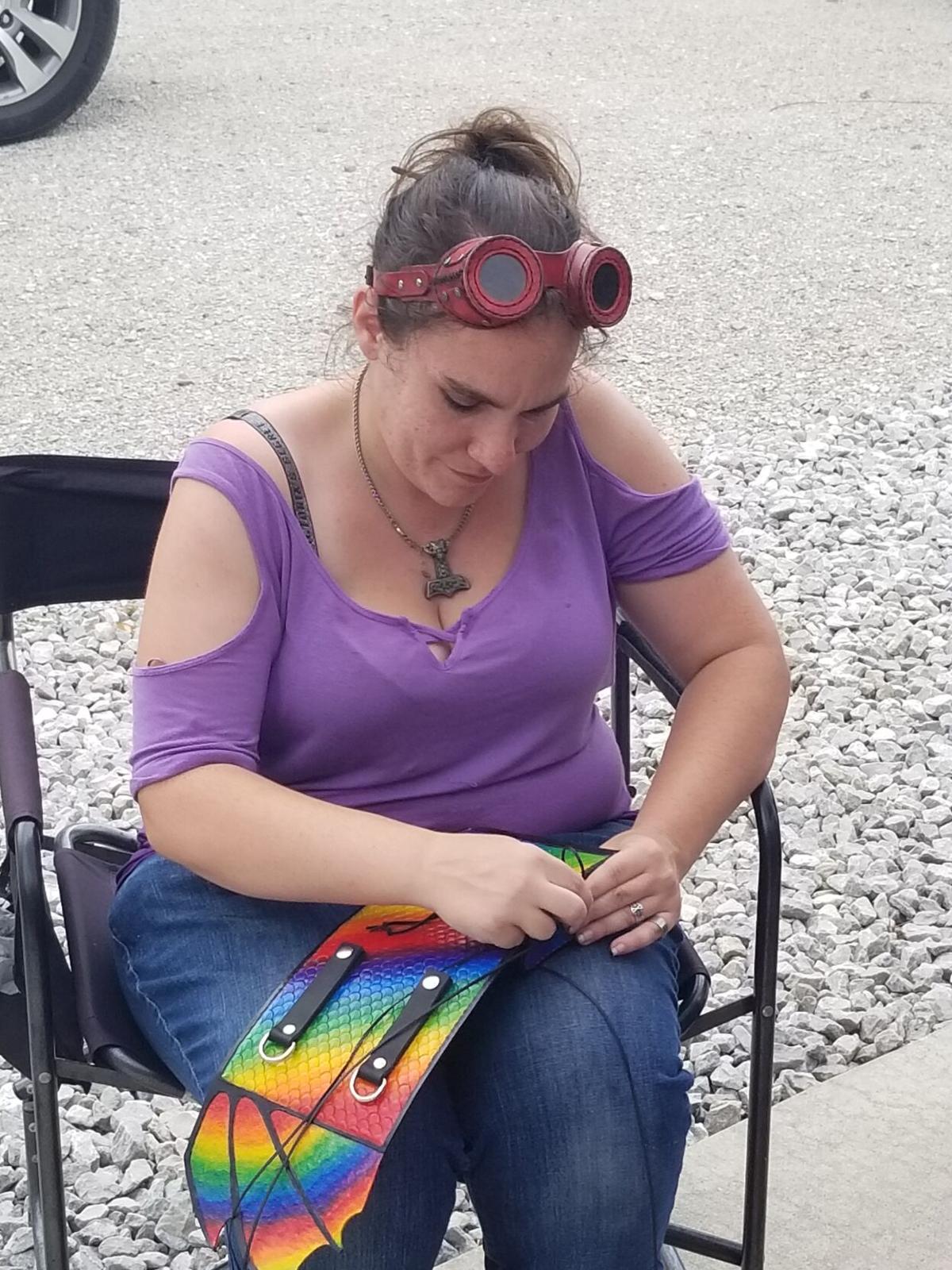 Michelle Dane, owner of LLSF Leather using a double-stitching technique to stitch one of the many leather bags she sold at the event. 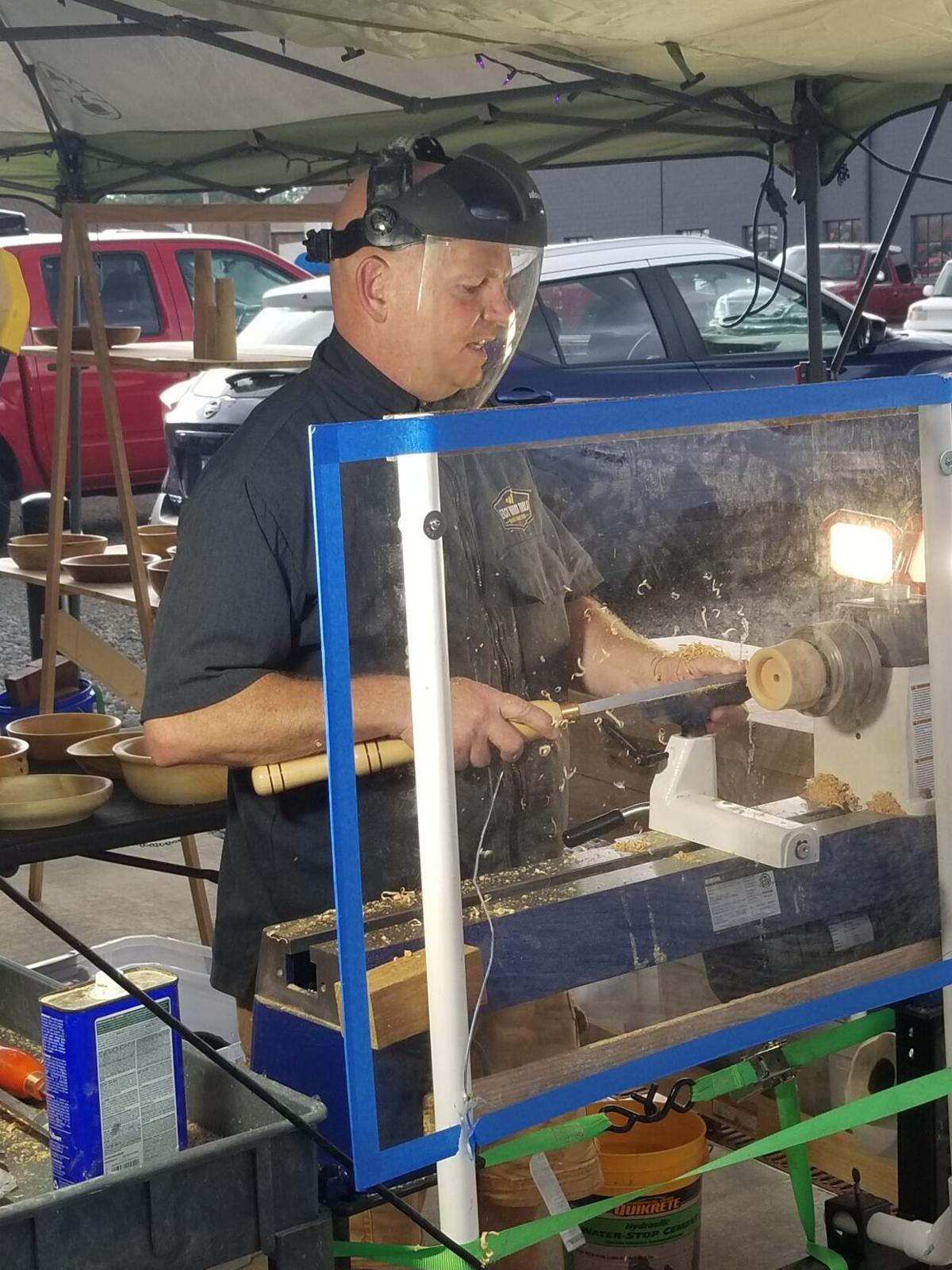 Shawn Bates, the owner of Burnt Bottom Creations takes a short break from working with his lathe to create a bowl.

Michelle Dane, owner of LLSF Leather using a double-stitching technique to stitch one of the many leather bags she sold at the event.

Shawn Bates, the owner of Burnt Bottom Creations takes a short break from working with his lathe to create a bowl.

Saturday’s BazaArt and Chalk It Up To Art event delivered a variety of art forms and different personalities to draw in crowds with its chalk art and art vendors.

Starting on a hot morning, the event grew as many people shopping at the nearby Vine Street Market came to the event to see what it had to offer.

Cory Hollerbach, co-owner of Art Gecko Creative Studio and one of the hosts of the event, said she felt the day had been more successful and exciting than she originally thought.

“It was well over my expectations. We knew it was going to be a big turnout, but the city came out in full force and supported this event — the parking lot was covered this morning, it was awesome,” Hollerbach said.

“This morning, the Vine Street Market and Chalk It Up To Art have been awesome — there were some fabulous chalk art pieces. People were dancing, eating, drinking and having a really good time,” Burton said.

After looking at all the different art pieces throughout the day, Burton said some of her favorites were the chalk art people had done that morning.

“There was a girl over there that was drawing a dragon and it was really cool, and it was her first time [drawing on chalk] and I thought, ‘Wow, she really did an awesome job for it being her first time drawing in that medium,’” Burton said.

By the end of Chalk It Up To Art, Hollerbach said a total of 27 artists participated in the contest.

At the BazaArt art festival part of the event, Burton said seeing all of the different artists and their work was something she enjoyed.

“It has been great to meet all of these artists. There are a lot of new people that I have not met before, so it’s always good to see new art,” Burton said.

SIUE alumnus Jim Linksvayer said he brought many of his pottery pieces to sell to keep doing the art that he enjoys.

“The day has gone wonderfully. I’ve met a lot of new people, I have some great neighbors, and I’m looking forward to [the rest of the day and look forward to] hopefully repeating it next year,” Linksvayer said.

Shawn Bates, owner of Burnt Bottom Creations wood art business, said the weather was one of the only concerns he had, but otherwise the event turned out well for him.

“The setup and working with the team and getting organized was great. The weather has been less than spectacular, but I’ve prepared for the wind,” Bates said.

Bates also brought some of his equipment to the event and said he wanted to show people how he makes the wooden bowls he sold at the event.

Burton said Bates was one of the artists she looked forward to seeing due to the demonstration he planned offering the unique experience of seeing some of the process of turning wood into a bowl.

Hollerbach said the likelihood of the event coming back next year is high due to the community response.

“Based on comments from the citizens that came down, the chalk artists themselves and people that are here to support it, I think it’s gonna be a go for next year for sure,” Hollerbach said. “The mayor’s here and we’ve got some aldermen here, so we’ve been talking it up and it sounds like they’re going to be OK with it next year.”

Amazing information providing by your article, thank you so much for taking the time to share a wonderful article.