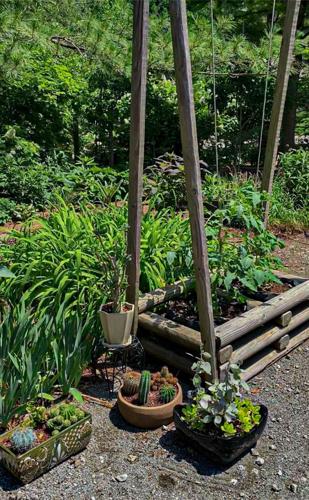 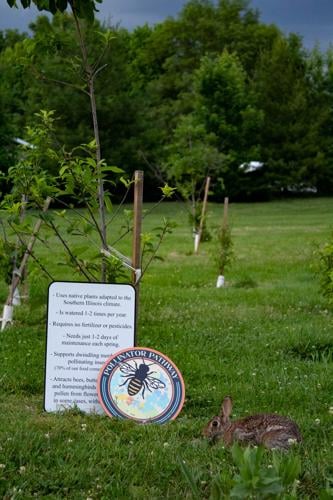 Some trees support up to 250 different kinds of caterpillars, whereas non native trees might support one or two, has a ripple effect that’s good for birds. When canvassing the neighborhood, neighbors said there were no animals, but they’ve already seen baby deer, rabbits, lots of birds, already impacting local biodiversity. 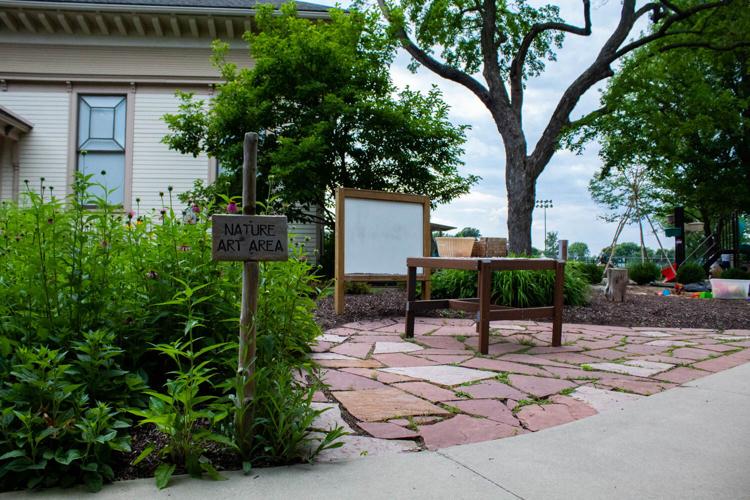 The Edwardsville Children’s Musuem’s garden has areas for kids to spend time in nature including a playhouse and art station. 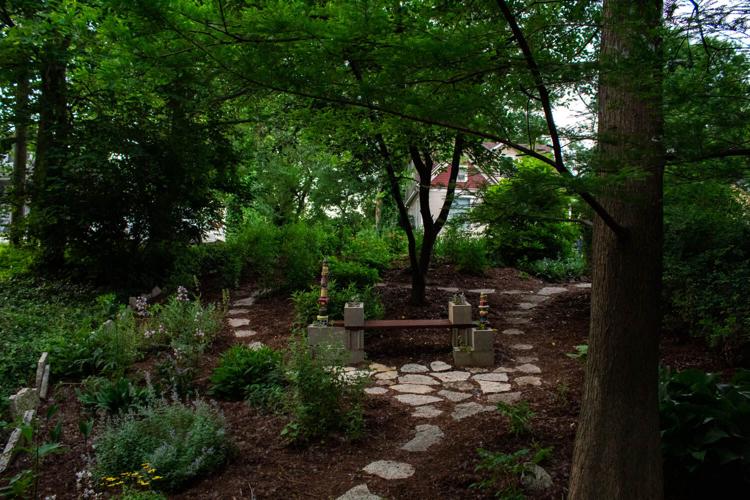 Chris Smejkal's garden features peaceful walkways that he has created with over 20 years of experience in his garden.

Some trees support up to 250 different kinds of caterpillars, whereas non native trees might support one or two, has a ripple effect that’s good for birds. When canvassing the neighborhood, neighbors said there were no animals, but they’ve already seen baby deer, rabbits, lots of birds, already impacting local biodiversity.

The Edwardsville Children’s Musuem’s garden has areas for kids to spend time in nature including a playhouse and art station.

Chris Smejkal's garden features peaceful walkways that he has created with over 20 years of experience in his garden.

With eight scenic stops in Edwardsville and Glen Carbon, the Edwardsville Children’s Museum’s garden tour allowed gardeners to show off gardens that were 20 years in the making.

One stop along the way was a micro forest, created by the Edwardsville Children’s Museum. Kristen Fries, director of the Edwardsville Children’s Museum, said when the property for the micro forest was donated by Cedarhurst Senior Living, she found an article about a method of planting trees on roundfield, or smaller portions of urban areas that aren’t in use.

"When it's mature it will positively impact Edwardsville ozone levels up to 35 percent, so you can make a big difference on a little piece of land,” Fries said.

Abby Schwent from the Edwardsville Children’s Museum said she emailed Doug Tallamy, author of “Bringing Nature Home,” and he advised them on native trees to plant.

“Not only would they do better here if we planted them, they wouldn't need as much water, as much maintenance, but they also impact biodiversity more than non-native species,” Schwent said. “Some of our trees support up to 250 different kinds of caterpillars, whereas non-native trees you might get one or two. And then that has a ripple effect that's good for the birds, and so on and so forth.”

Fries said they’ve received a lot of help from Alpha Phi Omega, Phillip 66 and local rotary clubs, and are now looking to do citizen education.

"We built a little forest at the museum that mimics what we're doing out here, so the kids in that exhibit can color an animal that would live in a southern Illinois forest, scan it and it scampers out into this virtual forest on the wall,” Fries said.

Kathryn Biarkis, master gardener for the Edwardsville Children’s Museum, said their garden encourages imagination with nature as the factor.

"All of us need to be out in nature, and I think one of the things too by being … fenced in, so it's a safe place for a child to be and to just let their imagination run with it,” Biarkis said.

Biarkis said the museum is also part of the Pollinator Pathways initiative by having a pollinator garden, which gives insects a place to stop and feed.

Chris Smejkal, homeowner of one of the gardens in Edwardsville, said he started his garden in 1998 by tinkering around in the yard. Smejkal’s garden features magnolia trees over 100 years old, handmade pottery, 70 containers with different flowers, English ivy and native plants.

“Every year [I] just added something different and I don't really know how it all started. Honestly, it just kind of happened organically and I fell in love with doing it,” Smejkal said.

Smejkal said the garden takes about four hours a week to maintain, but once a garden is established, it tends to take care of itself.

"I tell people all the time that a lot of people have half an acre that they mow twice a week at probably two hours a pop, and then they have to blow and weed eat and everything. In the summer I'm only out here maybe a couple hours throughout the week, just doing a little watering, pulling a few weeds,” Smejkal said.

Smejkal said the key to taking care of a garden is to do a little bit at a time.

Elizabeth Whale, homeowner with a garden featured in Glen Carbon, Illinois, is a commercial horticulturist and sole keeper of her garden. She said her garden started as an iris garden, but because it was boring, she began adding more plants.

“My love is herbaceous perennials, so that's the vast majority of them … the rain garden is for plants that love wet, I have a crevice garden in the back that's for sharp drainage plants, but the majority of this ground is what I would consider heavy clay with sufficient moisture, so there’s a pretty good ground to grow,” Whale said.

Whale said she has taken 20 years to create the garden and adds 100 to 150 plants each year.