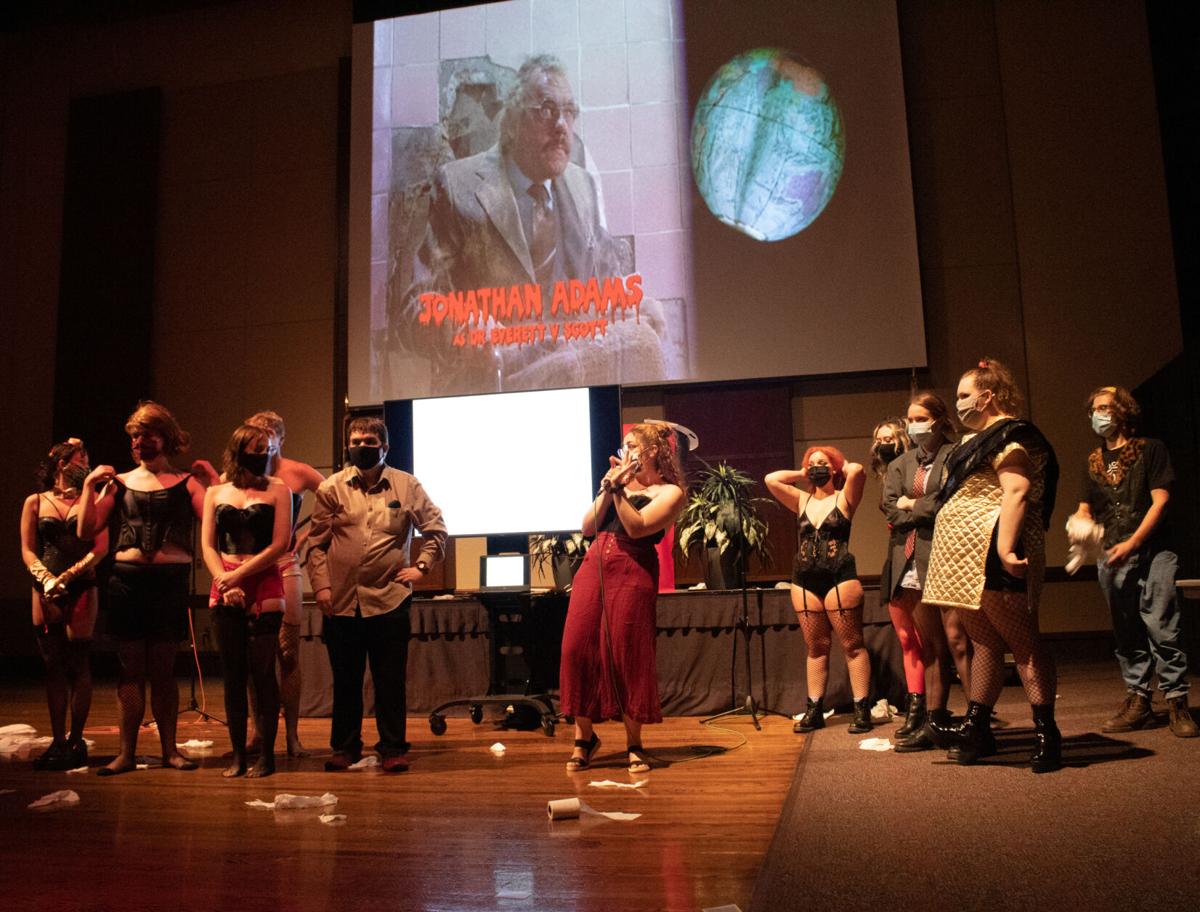 “Rocky Horror Picture Show” is a film with a cult following. And, thanks to this following, theaters showing the film usually have a cast of fans, dressed up and following along with the film as it plays behind them. 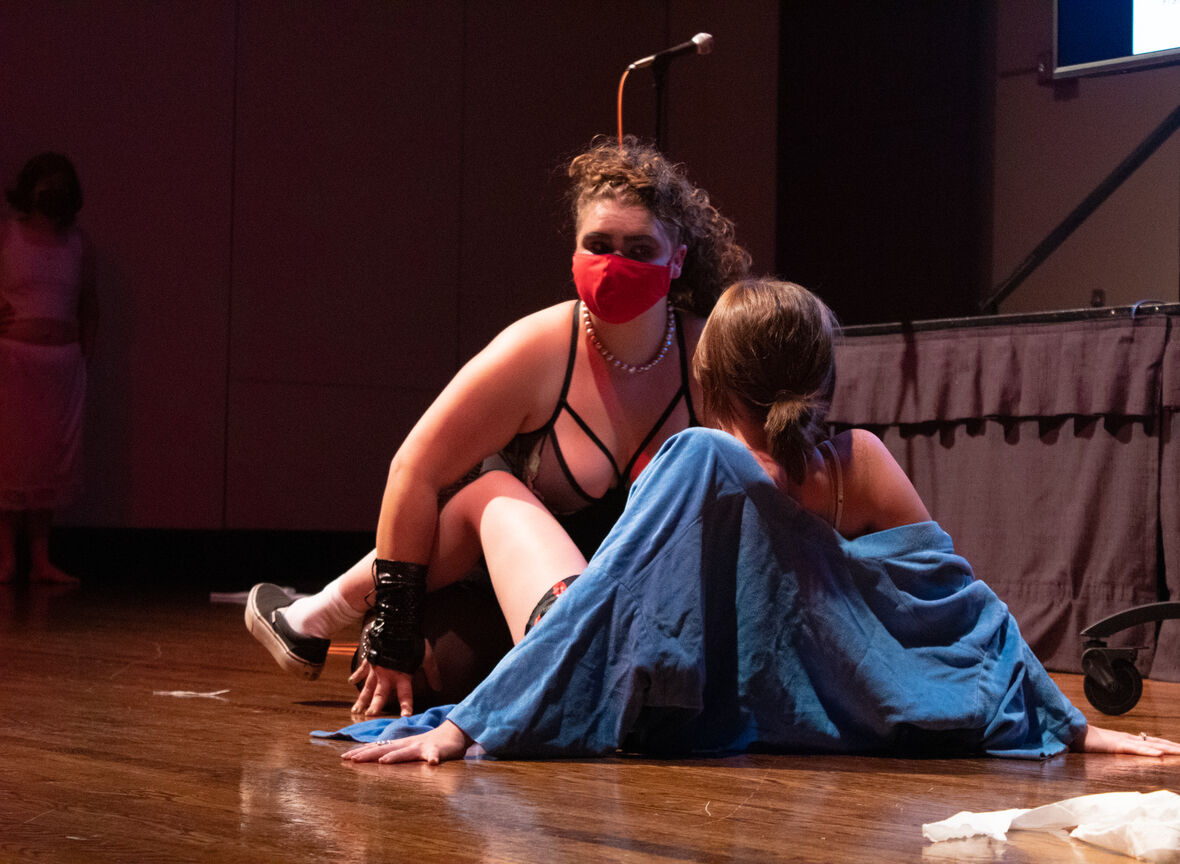 Montana Hughey's Frank N. Furter pins Sydney Martin's Brad Majors in one of the many sexually explicit scenes in this cult classic film. 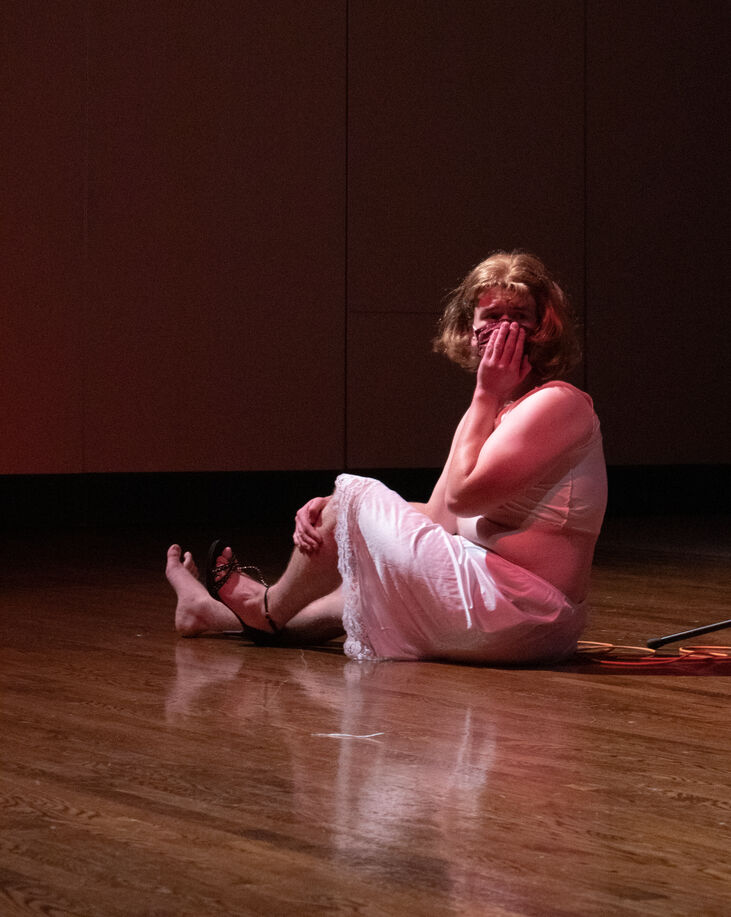 “Rocky Horror Picture Show” is a film with a cult following. And, thanks to this following, theaters showing the film usually have a cast of fans, dressed up and following along with the film as it plays behind them.

Montana Hughey's Frank N. Furter pins Sydney Martin's Brad Majors in one of the many sexually explicit scenes in this cult classic film.

After a one year break from their performance of “Rocky Horror Picture Show”, the Student Experimental Theater Organization returned with a larger audience than before.

“Rocky Horror Picture Show” is a movie that has gained the title “cult-classic” and lead to performances that entail having the movie playing while live actors perform what is occurring on screen. To enhance audience engagement, it also includes a prop bag for each participant and audience prompts on a different screen for things to shout out, dances and when to use the props.

Senior theater performance major Montana Hughey from Billings, Montana, said while she has assisted with Rocky Horror at SIUE in the past, this was her first time participating as an actor. She said she had always wanted to play Frank N. Furter and was very happy with her experience in the role.

“This is the best crowd we’ve had in probably six years, so it was an amazing turnout, even for a COVID year,” Hughey said. “I’ve never felt like that on stage, I’ve been doing this a long time, but that was amazing. The energy of the audience was just fantastic; they were such good sports.”

The actor for the character Columbia, junior theater design and technical major Emma Davis from Kansas City, Missouri, said they felt performing in the Madison room, rather than the full Meridian Ballroom, along with a larger-than-usual crowd enhanced the show’s experience.

“It definitely kind of kept the energy going that was in the space because we were really packed in,” Davis said. “Especially because we had to add more chairs and there were more people in here, it was very nice to have all that energy.”

Hughey said she thought the crew really pulled together as a team and this show couldn’t have come at a better time.

“We all agreed that we all really needed this after being in quarantine for so long,” Hughey said. “No one has seen each other, no one has seen flesh in probably forever, so to come together and just have a good, sexy time, why not?”

Rocky Horror virgin, or first-timer to the show, sophomore mass communications major Madison Sample from Indianapolis said she had been asked to go to this show many times in high school, but never found the time to attend. Before the show, Sample said she was very intimidated by the atmosphere and had no clue what she was getting herself into.

Despite her nerves, Sample said she was happy to experience something new.

“Theater kids are kind of scary sometimes, because they are very dynamic, it’s loud, there’s a lot going on, it’s chaotic,” Sample said. “But I think that’s also a good thing. It’s getting you out of your comfort zone and pushing you, which is what you’re supposed to do in college.”

Sophomore special education major Katie George from Springfield, Illinois, said although she had seen the show before in her hometown, this was a whole new experience for her.

“When I saw it before, they were [only] acting it out, [there] wasn’t a movie,” George said. “And this was an interesting combination, but I enjoyed it … Interesting way to spend a Tuesday night.”

After the show, Sample said although she had no idea what was going on and was very overstimulated trying to follow the chaotic environment, she really enjoyed it. She said her dad was excited to hear her thoughts as well.

“My dad used to go to these shows all the time, so my dad was texting me the whole time, he’s like, ‘Oh my God, how are you liking it?’ I’m like, ‘I don’t know how I feel about you really loving this, Dad.’ Like, I’m a little scared that he was really into this in the ‘90’s,” Sample said. “I would do it again, I don’t understand what happened, but I definitely would do it again.”

For more information on this show and future SETO performances,