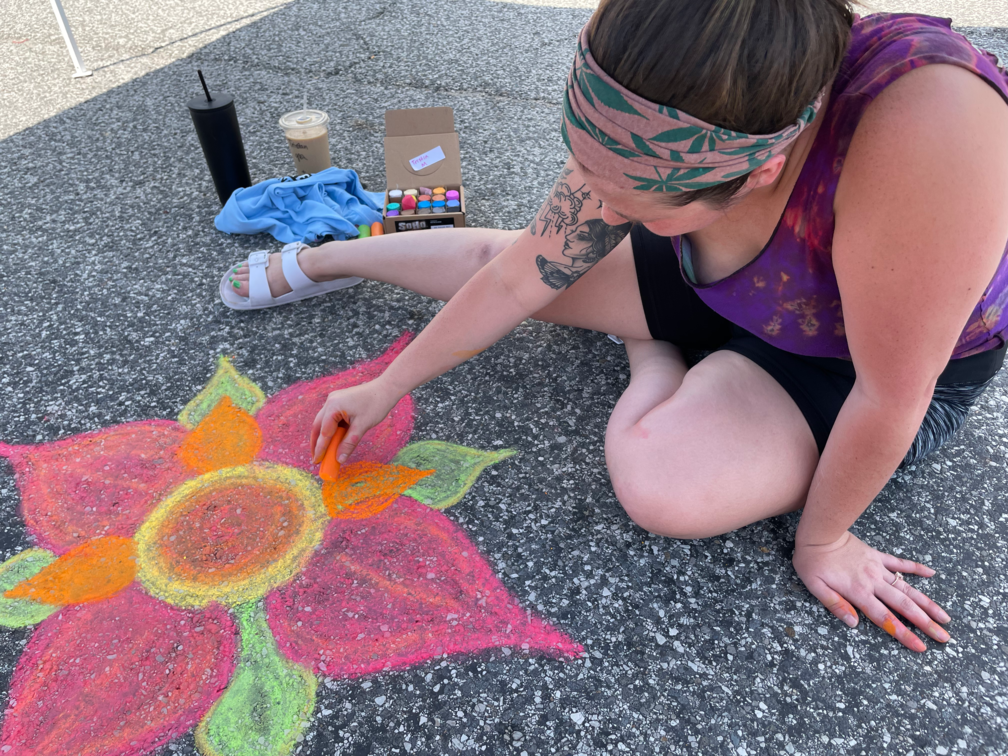 Tristin Haslam, an artist, draws a chalk mandala at the festival. 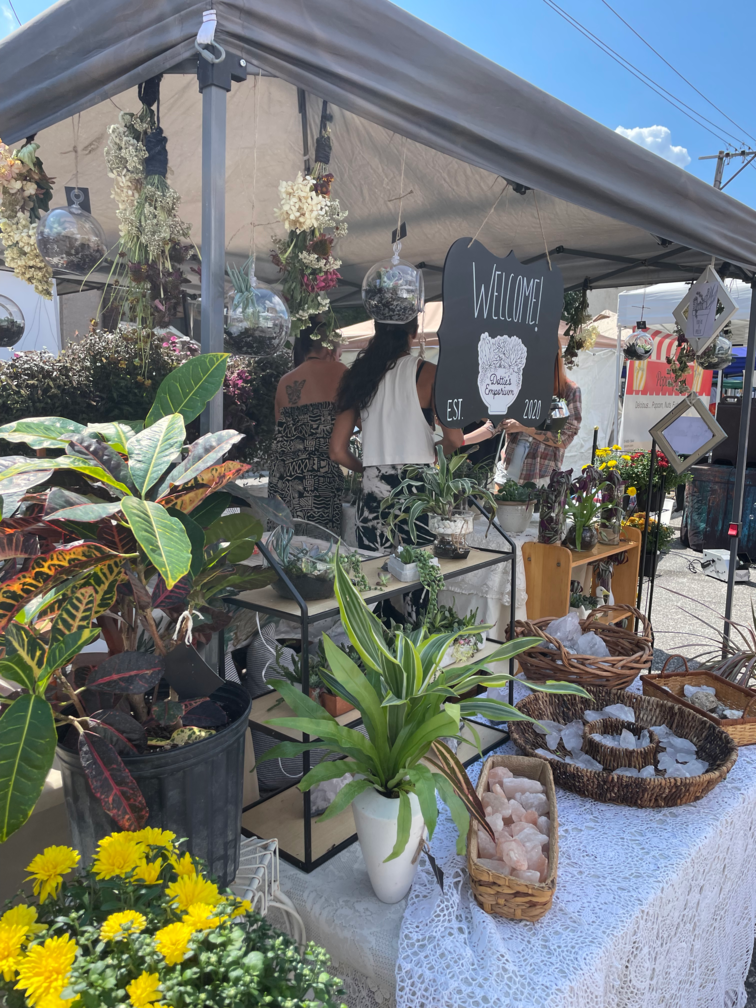 Dottie’s Emporium, a local business that sells succulents, crystals and other plants was one of many companies featured as part of the fair. 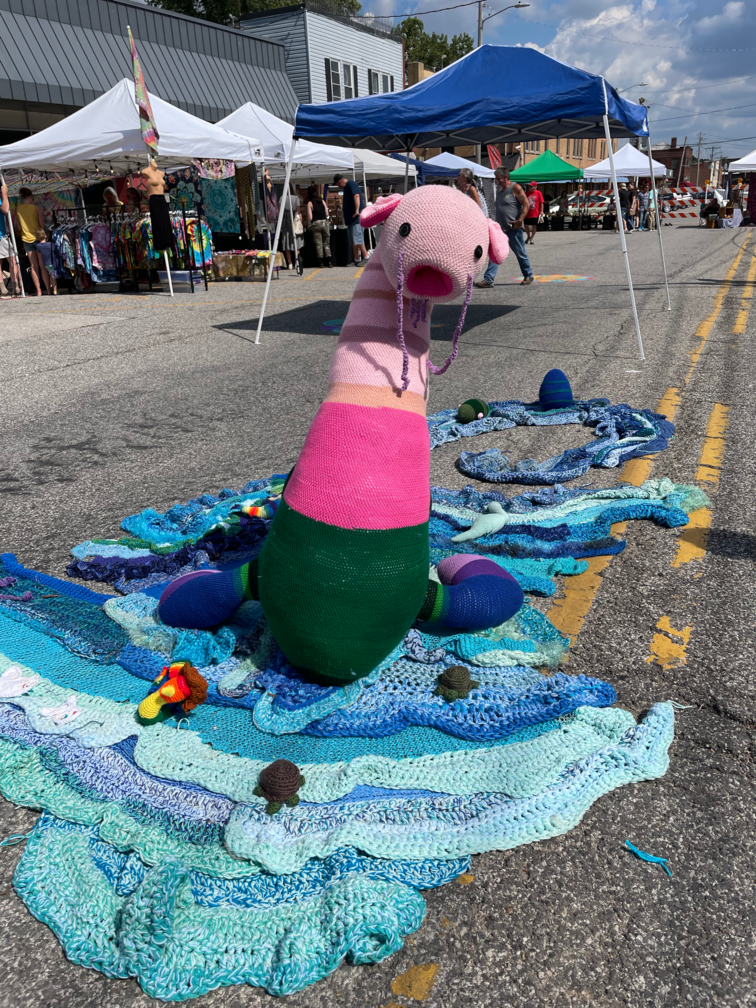 The Riverbend Yarn Bombers created a colorful river monster that was displayed at the festival.

Tristin Haslam, an artist, draws a chalk mandala at the festival.

Dottie’s Emporium, a local business that sells succulents, crystals and other plants was one of many companies featured as part of the fair.

The Riverbend Yarn Bombers created a colorful river monster that was displayed at the festival.

Education centers and local artists took center stage at Alton’s Mississippi Earthtones Festival, an annual event put on by Alton Main Street and the Sierra Club. This year’s event was the 15th anniversary of the festival.

There were local bands, eateries, thrift stories, eco-friendly businesses and local conservation agencies. Each year, the event has a theme and the organizer chose this year’s theme to be “Metamorphosis.”

The festival had music playing throughout the day, filling the whole space with alternative R&B by Sounds of Syla or a tribute to The Grateful Dead by Jake’s Leg.

The festival’s main goal is to promote green living and showcase local ‘green businesses’ that benefit the Mississippi River, while also promoting local artists, according to Sara McGibany, the executive director at Alton Main Street.

“[We are] basically celebrating the river through art, music and conservation,” McGibany said.

Pat Powers, a volunteer with the Piasa Palisades branch of the Sierra Club said the club promotes the transformation of the planet and that their main goal at the festival is to educate and hand out butterfly weed seeds.

“What we’re doing here is handing out butterfly seed packs for helping the repopulation and to be sure that they have enough of the things that attract them,” Powers said. “[Our] main goal here is to hand out [the packets] and educate people.”

Other educational centers at the festival included the National Great Rivers Research and Education Center, which made reusable totes out of old T-shirts to cut down on plastic bag usage.

“A lot of these plants are good for pollinators: bees, butterflies, caterpillars. I try and promote people to plant native plants to help native species,” Shirrell said.

The event also featured local artists. Many of them displayed their talents through chalk mandalas drawn on the streets of the festival. Artist Tristan Haslam said she was inspired by the theme of the year, and based her drawing on it.

“When I first started going into recovery, one of my favorite quotes was ‘As soon as the caterpillar thought the world was going to end, it turned into a butterfly.’ So I thought that was a really good theme. So I want to kind of make that into a mandala,” Haslam said.

Renegade Herbals, a business that sells organic soaps, beard oils and salves, was one of the many booths at the festival. Sarah Bettes, one of the co-owners, said they love coming to the festival because of the overall vibe and message.

“It’s just a great vibe. Like the music goes all day long and everybody’s in a good mood and it feels good to be here. It doesn’t hurt that it’s our best festival of the year,” Bettes said.

“It’s pretty kick back and mellow. And the people are, just everybody’s in a good mood,” Kirbach said.

Part of the festival was also to tell people about local volunteer events coming up that the public can be a part of. The Mississippi Earthtones Festival hosts a river clean-up the Saturday after the Festival. This year the event will be from 8 a.m - 3 p.m on Saturday, Sept. 25 in Alton, Illinois.