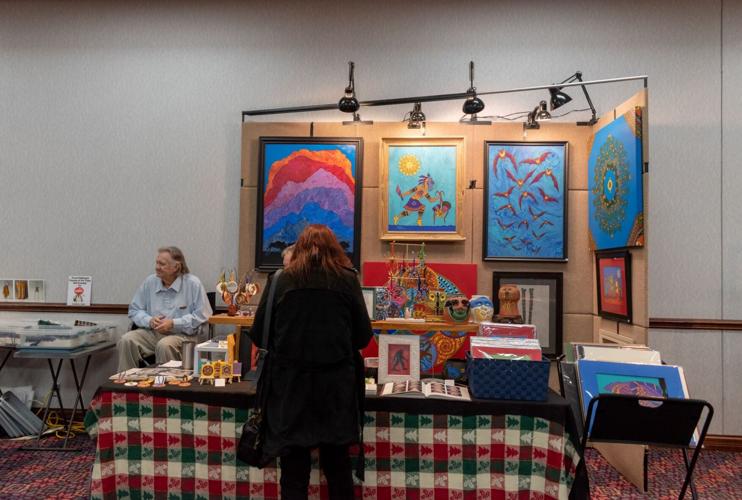 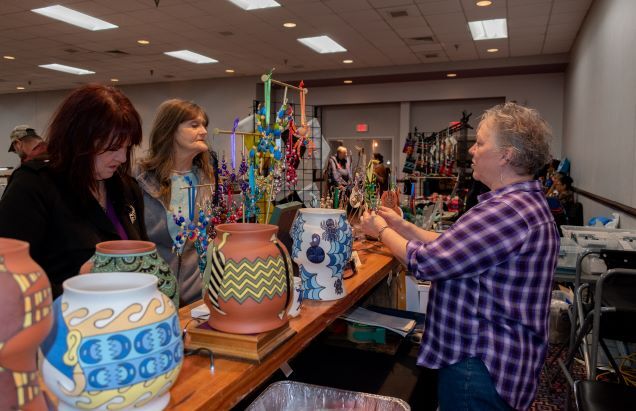 From dolls and spiders to flutes and medicine bags, Native American artists showed off a wide variety of handmade artwork in the annual Cahokia Mounds Holiday Market.

The Cahokia Mounds Holiday Market was coordinated by Linda Krieg, who said she has been working for Cahokia for 25 years. Krieg said the Holiday Market, one of two showcases held throughout the year, started out small.

“We started 19 years ago for this show,” Krieg said. “The first year I had it, I had five artists. They don’t know you, you don’t know them.”

Krieg said that since then, the show has grown quite a bit, now incorporating a much wider variety of cultural and tribal backgrounds.

“The show now contains 39 artists from 50 states, and they represent Iroquois, Mohawk, Creek, Navajo, Zuni, Hopi, who come together with paintings, sculptures, metal art, baskets, jewelry, hide paintings, musical instruments and much more,” Krieg said. “We carry as many different tribal affiliations as we can locate to come.”

William Harjo said his work has provided for his family, as well as taken him around the world. Harjo, a flute maker and member of the Muscogee Creek tribe, said he has branched out from the river cane he first began with.

“I’ve been making wind instruments, the Native American Indian flutes, for over 30 years. I make them out of river cane, cedars, exotic hardwoods,” Harjo said. “Here today I’ve got woods from Hawaii.”

Harjo said his journey with flute making originally began as a way to earn money through unemployment.

“I started making flutes [for] economic improvement. I quit my job as an alcohol and drug counselor because of stress,” Harjo said. “For a stress reliever, I had a flute that was given to my son, and it was made out of river cane, and it just happened where I moved there was river cane, so I started reproducing wind instruments like the one he had.”

Harjo said his first big order for the flutes was for a quantity of 50 for a powwow.

“My son was a dancer in the powwow world … In order to get him to powwows, I made a handful [of flutes] to take to other vendors and sell them for gas money or an evening out. After a while somebody said:, ‘Can you make one like this?’ showed me a different one and I said, ‘Sure.’ He said, ‘Well, I’ll take 50 of them,’” Harjo said. “I’ve been making flutes and taking them to powwows ever since.”

Harjo said his flute business has not only gotten him through unemployment, but also enabled him to finance his son’s education.

“I got my son through high school and through college, and I also purchased a house,” Harjo said. “It’s been pretty lucrative.”

Harjo said he has also sold CDs and had the opportunity to do a number of tours in Europe because of his flute making career.

Victoria McKinney, Arkansas native and member of the Cherokee Nation, said a lot of the inspiration for her artwork has come directly from Native artifacts themselves.

“I started seeing the iconology in the pictures in my textbook, and I was blown away. Normally when you think of Native American art, you think of teepees and cactus with coyotes and things,” McKinney said. “This stuff just captured me. I’ve never had any art training, but I wanted to do something with these images, so I started out with pottery, and then moved onto painting.”

During the pandemic, McKinney said she did extensive research on the role of spiders within Native American folklore.

“Spiders were part of what I researched. I’d go to museums, I’d go to archaeology conferences, I’d go to dig sites,” McKinney said. “Spiders are a big thing for this branch of the mound builders in the Mississippi River valley here. I’ve just incorporated some of the different stories, and being Cherokee, I was interested in some of their origin stories as well.”

Krieg said the vast majority of what we know of the Cahokia mound builders is based on archaeological finds at dig sites like the ones McKinney attended.

“We don’t have anything written, because it’s prehistoric, so we go according to what we believe from the archaeological digs,” Krieg said.

McKinney said much of her inspiration came from a dig site at Cahokia, so the area is of special interest to her.

“Cahokia is a big inspiration for me as well … One of the things that impressed me about being able to go to the dig sites was that, being friends with the archaeologists there, I got to get down into the pit and got to see what they were doing,” McKinney said. “When you go to a museum, you have to have the gloves on, and little trays come out and you look at things, and you might not be able to touch them.”

McKinney said one of the most exciting experiences she had was actually being able to handle the artifacts themselves in the dig site.

“They found a little bone fish hook, and they just turned around and put it in my hand,” McKinney said. “It doesn’t sound like much, but it was a thrill for me, especially when you think about how many eons ago that somebody fashioned that and it got left in the earth for some reason, and you don’t know whoever touched it last.”

Victoria’s husband Tom said she has done a lot of work popularizing “southeastern motifs,” such as the imagery in her art. Tom also said Victoria has spent over 20 years encouraging tribes to emphasize their own cultural traditions in their art, and they have been met with success.

For more information on Cahokia Mounds, visit its website.