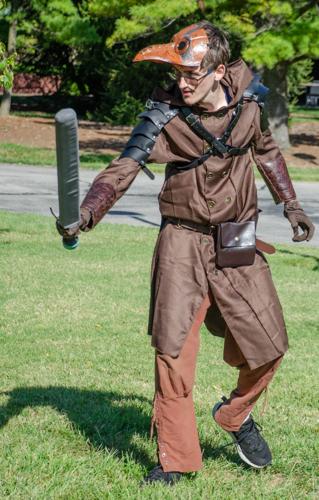 Secretary of the club Ryan McMahon (Dox) poses in his fighting stance. 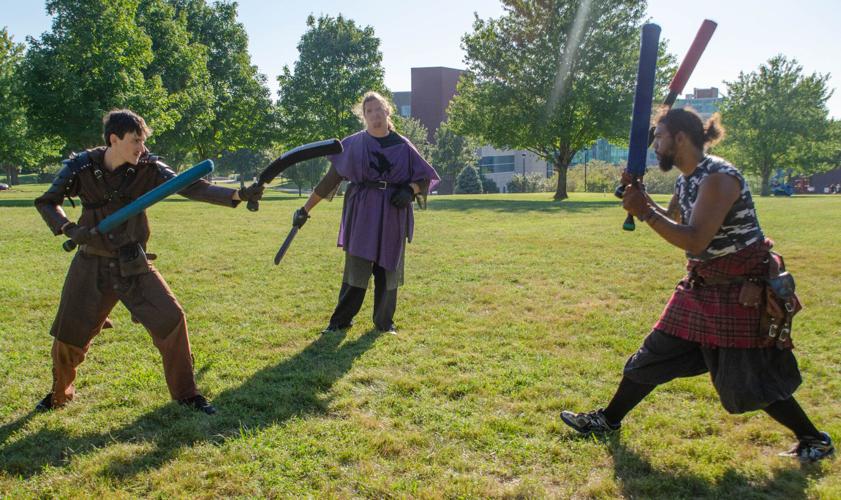 Ryan McMahon, Dox (left) fighting Theron Orr, Thor (right), a consultant for the club, while the president/treasurer of the club, Zachariah Gillespie, Roam (center) watches on. 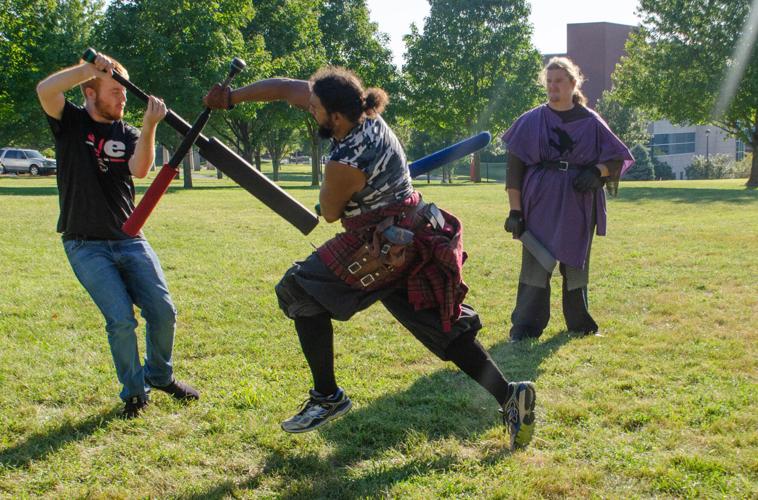 Secretary of the club Ryan McMahon (Dox) poses in his fighting stance.

Ryan McMahon, Dox (left) fighting Theron Orr, Thor (right), a consultant for the club, while the president/treasurer of the club, Zachariah Gillespie, Roam (center) watches on.

Foam swords collided on the Dunham lawn as the medieval combat club conducted a public practice on Wednesday, Aug. 31, open to anyone interested.

Zac Gillespie, president of the club, first brought the sport of Belegarth to SIUE after attending the St. Louis Renaissance fair.

Gillespie, who fights under the name “Roam,” said that Belegarth is a combat-oriented organization with chapters known as “realms” all over the world.

“It is a worldwide sport,” Gillespie said. “They actually have events over in Germany, France, Belgium … I believe there’s a couple in Mexico as well.”

Ava Ploeckelman, vice president of the club, said that the realm at SIUE formed very recently, originally over the social media site Reddit.

“Zac put out something on Reddit … and [we] answered the call. We worked together to start this club last semester,” Ploeckelman said.

Ploeckelman, who fights under the name “Andromache,” said that a public practice could help the club bolster its numbers and get people involved.

“We really wanted a place where we could put swords into the hands of as many people as possible, because it’s really an addicting kind of sport,” Ploeckelman said. “We want diversity, and we want a lot of people to join us and come have fun with us.”

The fencing club, a separate organization from the medieval combat club, was represented in part by Logan Richter. Richter, vice president of the fencing club, said that sword fighting was not only a fun activity, but one which helped them out socially as well.

“It was a great place for me to meet a lot of people who are interested in the same things I’m interested in,” Richter said. “I found that it really helped improve my self-confidence.”

Duke Orr, who fights under the name “Thor,” is the instructor for the club. Orr said that he has traveled as far as Spain to fight, and that one of the most fascinating facets of the sport is how everyone has a different personal style.

“It got me connected with some of the best friends I’ve ever had in my life,” Orr said.

Orr said that he has always been interested in the medieval life, and that for him, Belegarth is a way of getting back to our roots as a species.

“I liked the simplicity,” Orr said. “How we came from absolutely nothing, and now we have a computer in our pockets … the sheer magnitude of that has always fascinated me.”

David Wickman said he has been involved in sword fighting for 13 years. Wickman is president of the fencing club, and said he wanted to see what the other sword fighting club was up to.

“We love to meet other clubs and do stuff with them,” Wickman said.

Wickman and Richter both said after the practice that they would be interested in hosting a joint event between the two clubs.

“This is a really fun club,” Richter said. “It’s really interesting to see how [Belegarth and fencing] compare, what you can carry over and what you can’t … it’s a lot of similar people at our club.”

Orr said he emphasizes everyone’s ability to learn something new, and refers to fighters as “cadets” because no one ever stops learning.

Gillespie said that he hopes to spread word of the club across campus, and that the public practice attracted the attention he was hoping for.

“If you’re looking to blow off some steam and unleash your inner nerd, anybody and everybody is welcome to join us,” Gillespie said.

For more information on the medieval combat club, visit its website.