A growing topic in the media is human trafficking. There are more slaves today than ever before, according to Free the Slaves. There are multiple organizations behind fighting it, and more and more information has surfaced, including the recent slave trade exposed in Libya. Here’s a guide to what it is, why it is a problem and how college students can help stop it.

What is human trafficking?

According to the department of homeland security, human trafficking is modern-day slavery and involves force, coercion and fraud to obtain labor or commercial sexual acts.

“Every year, millions of men, women and children are trafficked in countries around the world, including the United States,” Homeland Security said. “Human trafficking generates many billions of dollars of profit per year, second only to drug trafficking.”

According to the International Labor Office, human trafficking generates around an estimation of $150 billion a year.

Who is trafficked and where does it happen?

Anyone can be a victim of human trafficking: They can be any age, gender, race or immigration status. They can be in third-world countries fighting the poverty line, or they can live in places like Edwardsville or St. Louis. It’s happening everywhere.

According to the Human Trafficking Center, people at high-risk include minorities, marginalized groups and displaced persons. Populations that are impoverished and survivors of interpersonal violence or homelessness are also vulnerable to trafficking abuse.

Traffickers often take advantage of these vulnerabilities, leaving close to 40 million slaves worldwide, according to CNN. It is also important to know that children make up about 25 percent of those victims, according to the Human Trafficking center.

Trafficking in cities is more common due to interstates and more vulnerable individuals. St. Louis is a city. It happens everywhere, and nothing is off limits to traffickers.

According to the Department of Human Trafficking, there are key indicators that can help identify victims and save lives. They give a full list at on the DHS website.

These indicators include people appearing disconnected, not attending school, have changes in behavior or sexual activity as well as people who show signs of being denied of their basic nutritional needs. These indicators do not necessarily prove trafficking has occured, but if someone falls into these categories, people can call the Department of Children and Family Services at 800-232-3798 or the Human Trafficking Hotline at (888) 373-7888.

What can college students do?

The first step in helping fight human trafficking is to become aware of the problem and learn more about it. There are plenty of resources and projects to help get the word across.

One in particular is the CNN Freedom Project. CNN is using their influential platform to share stories of victims and raise awareness. Students can share their articles and watch the videos to learn more.

Another campaign students can get involved with is Dressember. This is a style challenge open to both men and women. Individuals make a commitment of dressing up for the full month of December to raise awareness and funds to help fight trafficking.

The International Justice Mission is another organization that uses their raised funds towards rescue missions and rehabilitation of victims worldwide.

Students can use these resources to advocate for the fight against trafficking.

Another option is to recognize what consumption options exist. Consumers as a whole support labor trafficking without realizing it. Ethical Fashion and buying fair trade is a simple way to support the freedom of slaves and to ensure workers in other nations are receiving fair pay and benefits.

Brands that are fair-trade include Sseko Designs, local Plowsharing Crafts, Trades of Hope, Zee Bee Market and many more.

Lastly, students can attend human trafficking seminars when they are offered. Last summer, the East St. Louis Center hosted a seminar about identifying local human trafficking, and SIUE will continue to host more.

To find more statistics about trafficking in the U.S. can go to https://humantraffickinghotline.org/states.

*Individuals name is being withheld for their safety. 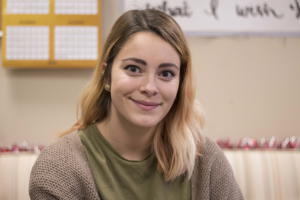