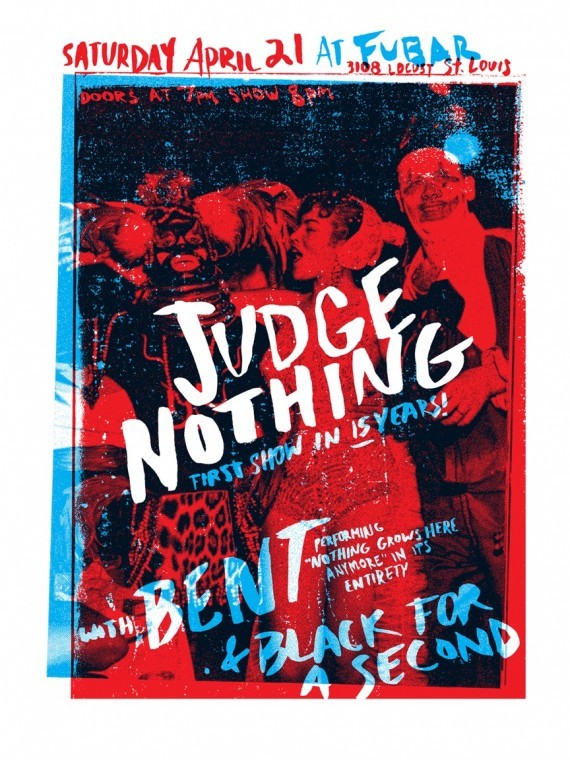 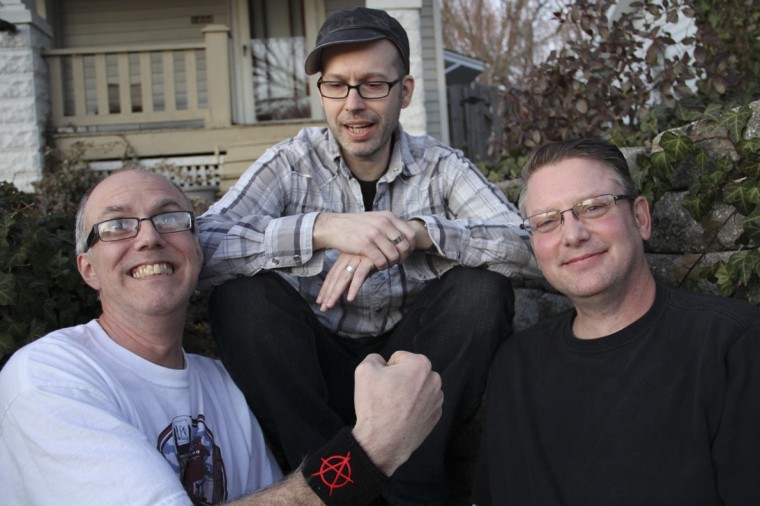 In the ’90s, pop-punk band Judge Nothing was just three SIUE students who wanted to make it big, and after years of struggling, touring, sleeping on floors, meeting new people and playing music, they found success.

After breaking up in 1997, they have decided to get back together for the first time in 15 years on April 21 at Fubar in St. Louis.

SIUE alumni Doug Raffety, vocals and guitar, Andy Dykeman, drums, and SIUE bookstore worker Flea Bodine, bass, said they have different reasons for wanting to get back on stage.

Raffety said he never really wanted to stop playing, even after the band broke up.

“Since ’97, it’s always just been kind of a dream that I tucked away in the back of my mind to want to do it again,” Raffety said. “It was just a matter of time. We’ve held onto a best friend-status friendship. There was never any kind of animosity or anything there, so it was just the right time and the right people to push us to do it.”

A friend of theirs, Rob Wagoner, was more than happy to give that push, according to Bodine. He will even be playing with them at Fubar, along with previous bassist for Judge Nothing, Carlos Huddleston, and Brian Leitner of Pet Lover.

“One of the guitar players who’s joining us, Rob Wagoner, has been trying to get us to reform for years,” Bodine said. “This particular day, April 21, is also National Record Store Day. It’s kind of a big event for music stores.”

Although the guys haven’t performed a show together in quite some time, Bodine said there have been a few times that they have gotten together to play again.

“A couple years ago we got together in a friend’s garage,” Bodine said. “We hadn’t done anything like that in 13 years. It [was] just like getting reacquainted. We missed each other. We got together another weekend that year and just recorded a couple of songs … We hadn’t lost any chemistry.”

They may not have lost anything, but Raffety said he has forgotten what it’s like to get anxious to perform.

“It’s funny, all those years of touring and playing, I don’t remember ever really getting nervous,” Raffety said. “I was just so used to it. It was just what we did, like a job. I didn’t really think much about it, but now I get butterflies about it. It’s nervous excitement.”

Judge Nothing has performed at a number of venues while touring, including CBGB in New York, Vino’s in Arkansas, The Outhouse in Kansas and Mississippi Nights in Missouri. They have toured with performers like Green Day, Joan Jett and the Descendents.

“We still keep in touch with the guys from Descendents,” Raffety said. “Not so much Green Day. They’ve kind of gone off on their own huge status.”

Raffety said Joan Jett was a big reason they set out to tour as much as they did. They wanted just a taste of what it was like to “make it” like her.

“Just to be able to get out and travel and see the states and meet new people and sleep on the floor and go to the next town,” Raffety said. “We weren’t making any money, but it didn’t really matter at the time.”

The guys still hang out and reminisce about those days from touring, according to Dykeman.

“We had a blast,” Dykeman said. “We all look back, and every time we get together, we talk about all the great memories and the crazy times we had together: no regrets, just pure fun. Nobody could ever take that away from us. We’d all get in our van. So you’d have your best friends hanging out with you and driving across the country playing music. You can’t beat that.”

In addition to meeting famous bands, playing at legendary venues and just plain enjoying themselves, Bodine said Judge Nothing had their songs on some notable TV soundtracks as well.

Raffety and Dykeman had been playing together since middle school, so they were often humbled by their success.

“He and I started in eighth grade, which would have been 1980-81,” Raffety said. “So, it’s been a long time. It’s hard to believe, even though we split in ’97, we still kind of held together. Doing what we’ve been doing for so long is kind of a rare thing for geeks like us.”

It wasn’t until 1989 that Bodine joined them. Dykeman said they had hung out with him a lot before then and had a blast with him.

“He was a fan of the band so he would come to shows and we’re like, ‘Okay, who is this odd fellow with mismatched Converse high-tops, usually a Hawaiian shirt and some kind of crazy shorts on that he wore in all seasons while we were in college?’” Dykeman said. “He was a great guy.”

When their previous bassist, Huddleston, decided to start a family and get a “real job,” he told the guys he wouldn’t be able to tour anymore. Not knowing what else to do, they looked to Bodine.

“Flea said, ‘I played cello in third grade,’ and we said, ‘Okay that’s close enough. You’re in.’ Carlos showed him the notes on the bass, gave him some tapes of our songs to learn by and within a couple weeks, we played our first gig,” Dykeman said. “Flea played perfectly that first night, so we knew we had the match.”

Not your average punk band

Because they had all been friends before playing together, they had a natural chemistry onstage, which set them apart from other bands at that time.

“I would have to say that the chemistry we possessed made us unique,” Bodine said. “It was essential. I don’t think that we would have gotten as far as we did along the way without that chemistry.”

Raffety said it may have even made up for any skill they may have lacked at the time.

“When we met Flea and got him in the group, we weren’t all these great players, but the chemistry was such a key factor,” Raffety said. “Something special was happening there that we had the same attitudes and the same dreams and aspirations.”

After the guys found their match with Bodine, they started working together to create a sound, which they all have trouble categorizing.

“That’s always the hardest thing for me to do,” Raffety said. “Someone described us as the Badfinger of punk. I can see that. It’s such a jumbled mix of angst, loudness, speed, slow. It’s kind of all over the board.”

Raffety thinks another thing that set them apart from a lot of punk rock bands was that he sang instead of screaming.

“Bill Stevenson, the drummer from Descendants, turned to me once when we were recording and said, ‘You know, you sound like a choir boy. I’m going to start calling you choir boy.’ I was a singer. I wanted to sing,” Raffety said. “It wasn’t fit for me to yell.”

Breaking up is hard to do

Even the most unique bands break up sometimes, and Bodine said that unfortunately happened to Judge Nothing after he had been with them for only seven years.

“The band actually broke up Feb. 2 of 1997, 38 years after the Buddy Holly plane crash to the day, so we call that the day the music died,” Bodine said.

None of the guys had families of their own at the time, according to Raffety, so that wasn’t the reason the decided to split. It also wasn’t because of any dispute between the band members.

“We were open for the next step for the group to happen,” Raffety said. “We put a lot of work into the group to try to get to that next level, not that we had this mindset to go out and become huge rock stars or anything, but the small label that we were on at the time knew that we wanted to get to the next step. It was just not quite there. It was a bit of a struggle. I think in the process of trying to do that, we just got tired. It was taking a toll on our individual lives.”

Dykeman said they rode it as far as they could ride it, but it was the right time to stop.

“Being on the road on tour for as long as we were is really hard, and we did it for so long and dedicated so much to it,” Dykeman said. “We were all getting frustrated. We figured out that we had other directions that our lives were taking us. It was kind of like, ‘Oh, we’re over,’ and we just said, ‘Yeah, guess we are.’”

They all remained close friends through the 15-year hiatus, and Dykeman said now he can’t wait to perform with them again.

“Our friendship has always been what has pushed the band forward,” Dykeman said. “We’re like brothers. We knew we would have that relationship with each other even after the band broke up. Now instead of just having barbeques and talking or emailing each other, we’ll just get up on stage and hang out again. It’s real exciting to get back together with the guys.”

Getting the word out

To promote the show at Fubar, the guys have been busy hooking up with Lewis and Clark Community College’s radio station 89.9 WLCA. Raffety called in last week for an on-air interview with the hosts, and on April 20 they will be doing a five-song acoustic set with a Q&A at the end.

“Mike Lemons, who is the program director for WLCA, has been a huge fan of ours for a long time,” Bodine said.

On April 21 they will also be doing a short set at 2 p.m. at Euclid Records in St. Louis for their Record Store Day weekend-long event.

More information about what Judge Nothing will be up to in the days leading up to the show at Fubar can be found at the Facebook event page, “Judge Nothing/Bent/BFAS at Fubar 4/21/12,” which was set up by Wagoner. Tickets can be purchased through Fubar for $12.

The guys aren’t calling this show a reunion, but Raffety said he can’t bring himself to say this is the last show they will ever play.

“It’s taken 15 years to do it,” Raffety said. “I certainly hope it doesn’t take another 15. I hope maybe after this experience we’ll second guess taking that long to do something because who knows what may come out of this experience. Something else may spark from it. I don’t want to say that this will never happen again. I can’t do that. I never felt that from the beginning.”

This reunion of the SIUE musical band has excited me and now I am expecting some very beautiful songs. My students often read essayshark reviews to know about writing services. They have been together after almost fifteen years and now they must be planning something great.