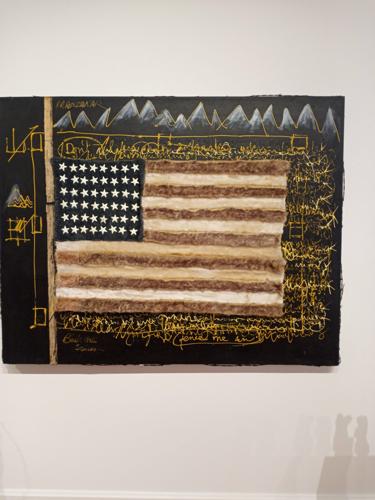 This piece was created as part of Towata’s Black Wall series, which was influenced by Towata’s childhood at the Manzanar internment camp. 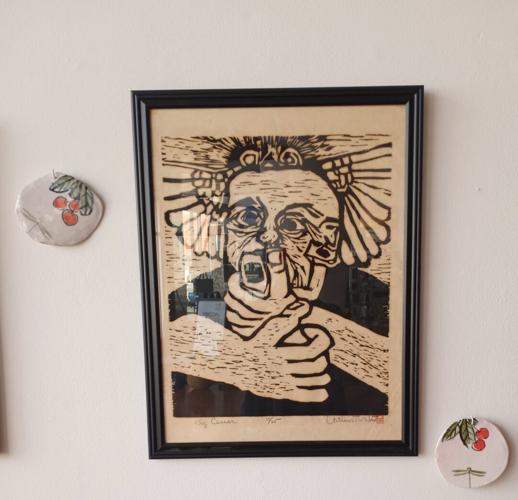 One of the most common motifs of Towata’s art was a dragonfly. He used it so commonly in his ceramics and pottery that it practically became his logo as an artist. 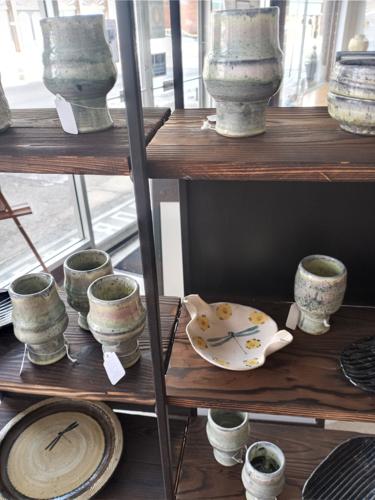 Although Towata sold some of his art in his life, he also frequently gifted pieces to close friends or family. Those pieces ranged from full paintings or sculptures to smaller pots and plates, like these. 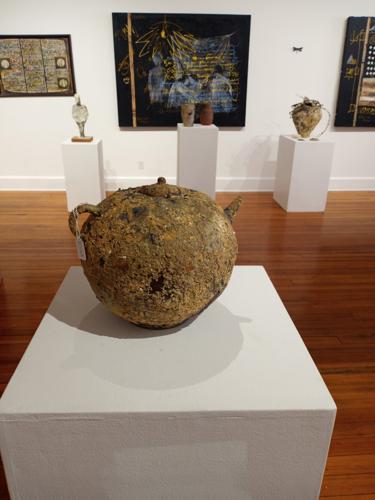 Walking into the Jacoby Arts Center, Towata’s range is instantly noticeable. Every piece displayed, from the intense Black Wall paintings, to the smaller ceramics were created by him.

This piece was created as part of Towata’s Black Wall series, which was influenced by Towata’s childhood at the Manzanar internment camp.

One of the most common motifs of Towata’s art was a dragonfly. He used it so commonly in his ceramics and pottery that it practically became his logo as an artist.

Although Towata sold some of his art in his life, he also frequently gifted pieces to close friends or family. Those pieces ranged from full paintings or sculptures to smaller pots and plates, like these.

Walking into the Jacoby Arts Center, Towata’s range is instantly noticeable. Every piece displayed, from the intense Black Wall paintings, to the smaller ceramics were created by him.

Art from the late alumnus Arthur Towata is on display now at the Jacoby Arts Center in Alton after a delay due to the COVID-19 pandemic.

The Jacoby Arts Center enlisted help from interns in the SIUE anthropology department for the show. Three students were chosen to help: Emma Pritchard, a junior, and Wren Merz and Kaia Cosgriff, who are both seniors.

Pritchard said since Towata was an SIUE alum, it was nice to share that connection with the artist and the art itself.

“He was one of the first graduating classes from SIUE. He got his masters here,” Pritchard said. “It's fascinating how much I’ve learned about him since I’ve been on the project. He had a crazy life.”

Towata’s art was most well-known for his ceramics, but he also worked in plenty of other mediums, including collages, watercolors, masks, drawings and more. A common image in his work was that of a dragonfly, which is a motif that can be found in much of his art.

The art was given to Jacoby for the show from Amy Ozawa, Towata’s niece and the executor of his estate. Ozawa said she was grateful to be able to showcase her uncle’s art, though she wishes it could be under better circumstances.

“He’s known for the dragonflies, or the watercolors, or the ceramics,” Ozawa said. “A lot of people haven’t seen it all and don’t know his full range. I think people didn’t realize that he created ash pots or figurines.”

CyRhen Smith, the exhibition coordinator for the Jacoby Arts Center, also said Towata was a big part of the art scene in Alton and the Metro East. Smith said she remembered meeting Towata when she was 15, before she knew who he was.

“I work with jewelry, and [while selling art at a market] this man came up and asked about my process. After talking for a few minutes, he remarked that he did art too, primarily with ceramics, and that there was more in common between our processes than he initially expected,” Smith said. “But then, quite a while later, while I was working here, they had a picture of Arthur out and they said we would be doing an exhibition of his stuff, and my jaw dropped, and I said, ‘I met him.’”

Towata’s connection to the arts in the area goes even deeper than that, according to Jacoby Arts Center’s Executive Director Rachel Lappin. She said Towata helped start the arts center itself.

“Towata was very instrumental in the start of Jacoby, and he was very involved in the art community in town. He was a really big part of Jacoby during his lifetime. He had done a few shows here before,” Lappin said. “And when he passed away, the art community asked us if there were any memorials coming up. Around then, we had started working with his family and his estate.”

Smith said Jacoby was grateful for the opportunity to show Towata’s art in memory of his life. He passed away in 2019 at the age of 86.

“When he passed away, it was only natural that someone [would] show his work. His family was looking for somewhere and he had put his art here a few times before,” Smith said.

Before helping found Jacoby, Ozawa said Towata had a studio he lived in and used as his own gallery, which he also rented out to artists in the area to showcase their art.

“He opened his own gallery in the ‘70s so other artists could have shows,” Ozawa said. “The arts center in town didn’t exist yet, so that was the only place for artists, really.”

There were darker parts of Towata’s life, Pritchard said. Towata was forced to live in an internment camp as a Japanese child in America.

“Whenever Arthur was a child, him and his family were actually taken away,” Pritchard said. ”He never really saw his father because he was taken first and he died in that separate camp.”

Pritchard also said Towata didn’t initially realize how much of his art was connected to that part of his childhood early in his career, but he became more conscious of that connection later.

“He wasn’t thinking about it on purpose in his art, but he looked back later in life, and found the colors he used in some ceramics were the exact same shades and tones as the sand in Manzanar, which is the camp he was in as a child,” Pritchard said. “He didn’t do his exhibit about that part of his childhood until late 2007. He ended up doing a whole entire series just from his experiences.”

With over 1,500 pieces of art at the arts center, Lappin said Towata was a very prolific artist, and the variety of art he presents is what draws many people in.

“His art is so powerful. I think that’s what’s unique about the show. People have seen his work in other chunks of time, or only certain mediums. He has paintings, ceramics, collages, masks and just so much,” Lappin said. “It was brought together here in a kind of unfortunately retrospective way. The range of it is so playful and humorous and serious at the same time. It’s beautiful.”

According to Ozawa, the thing that makes her uncle’s art special to her is his personality shining through it.

“He was a quiet person, but very observant and very funny … You could see his humor in his artwork, and all you can do is smile. When you examine a ceramic piece of artwork, you find all these different hidden things, like hidden faces or dragonflies,” Ozawa said. “You see the humor in the things he did. I can imagine him making these little hidden things, and chuckling about it, wondering who will notice it.”