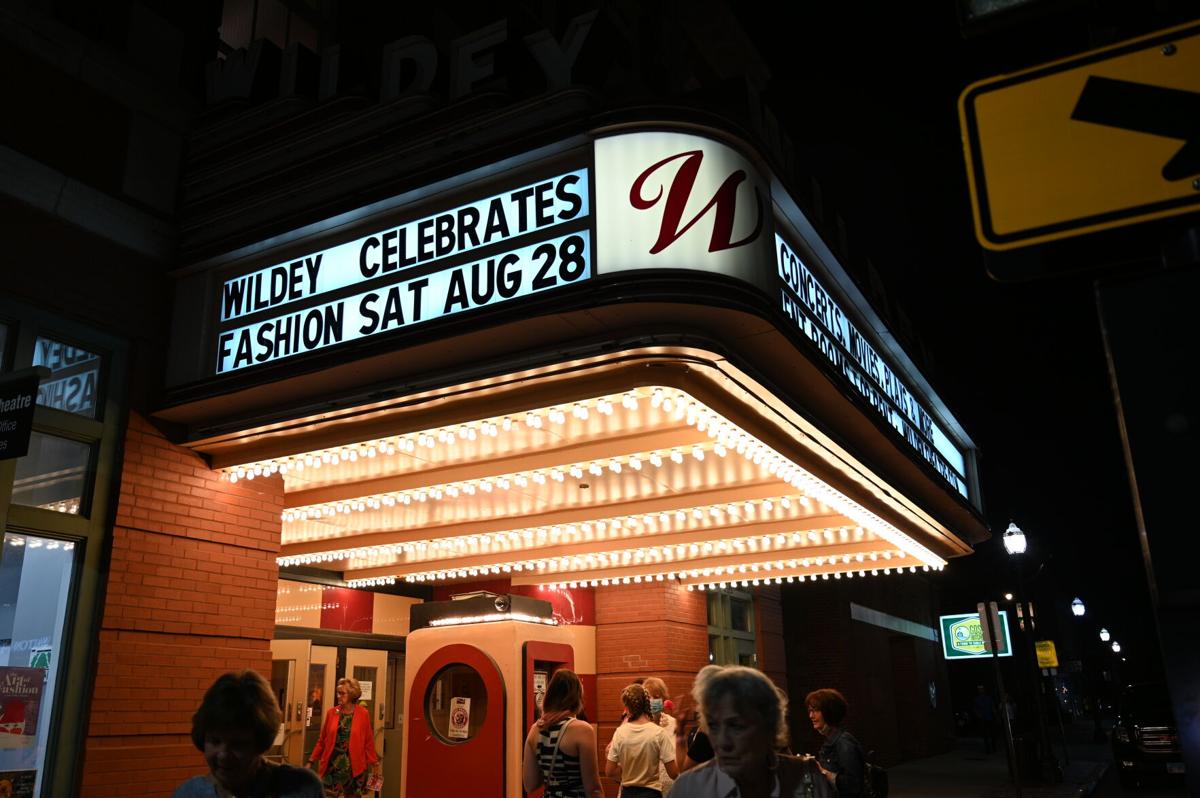 With students as models, and local businesses supplying the clothing as well, the fashion show was a truly local event. 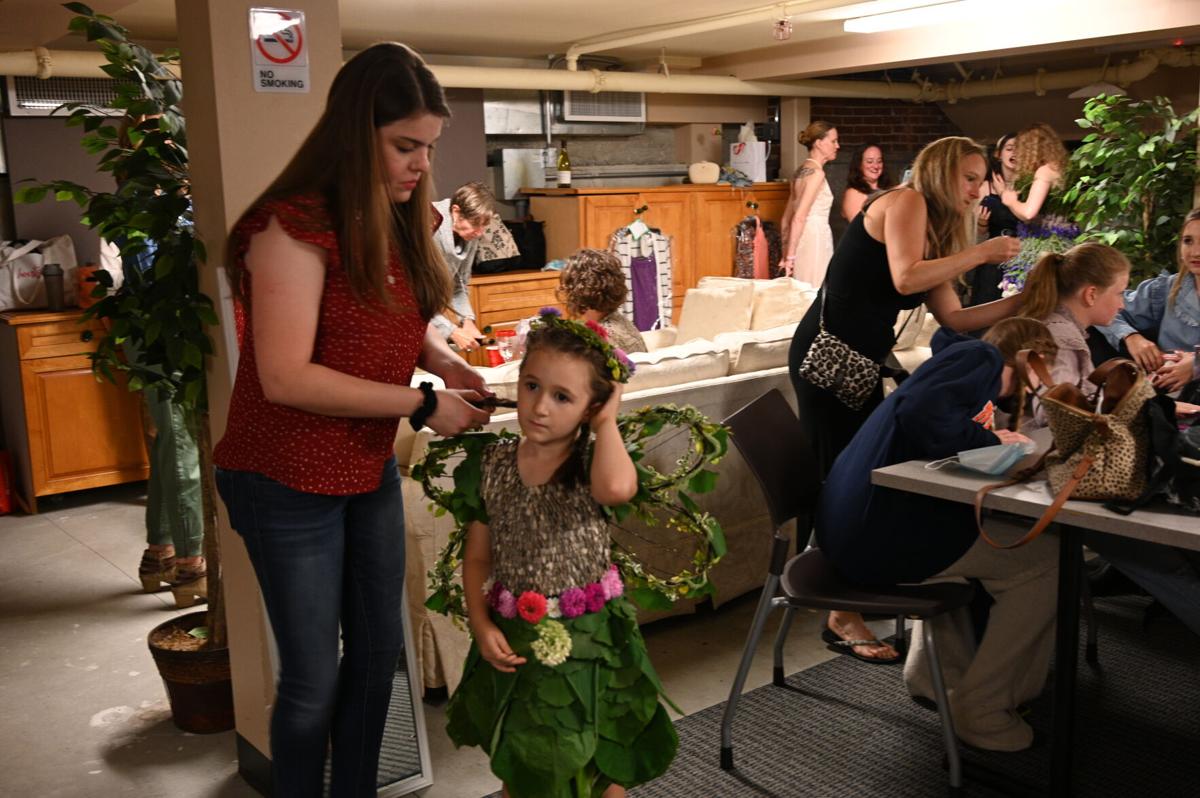 Amanda Juenger, one of this year’s designers, braids the hair of Josie Sledge, a local kindergartener, backstage before her fashion contest. 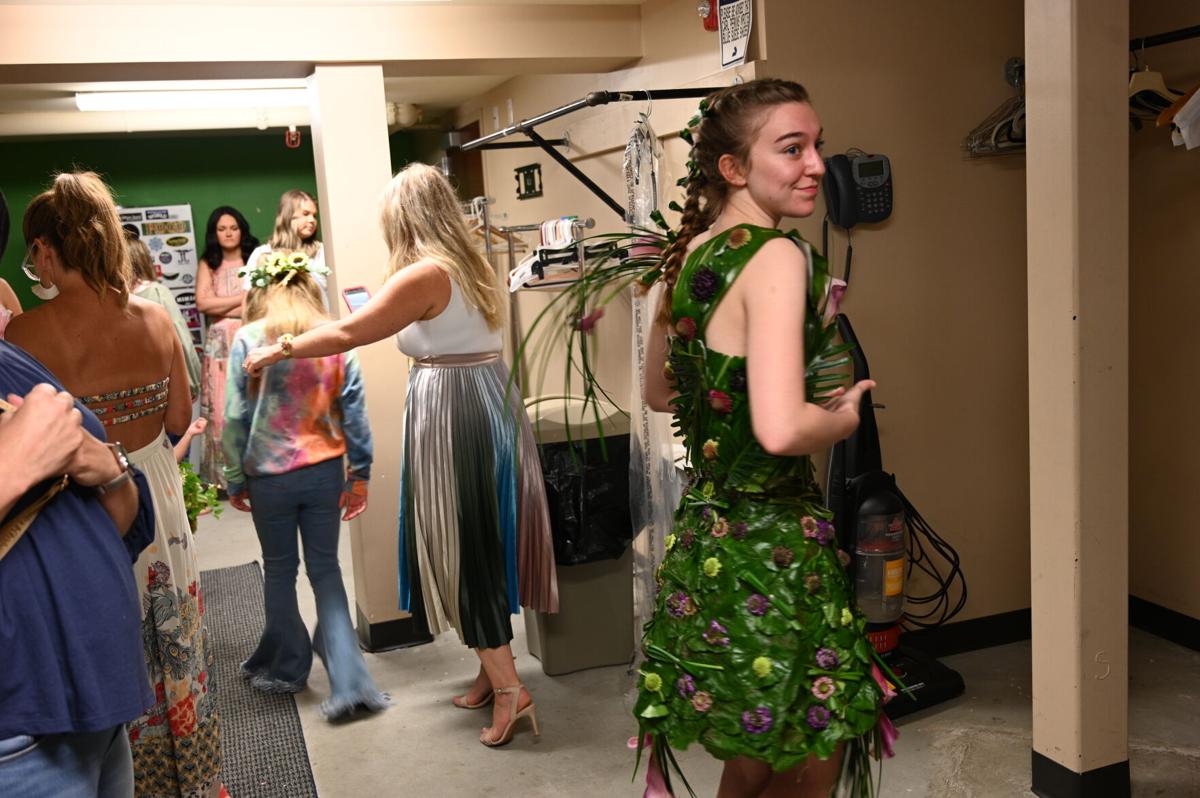 Kate Denson, a student at Edwardsville High School, wears a dress designed by A Wildflower Shop. She is backstage here, preparing for the show.

With students as models, and local businesses supplying the clothing as well, the fashion show was a truly local event.

Amanda Juenger, one of this year’s designers, braids the hair of Josie Sledge, a local kindergartener, backstage before her fashion contest.

Kate Denson, a student at Edwardsville High School, wears a dress designed by A Wildflower Shop. She is backstage here, preparing for the show.

The Art of Fashion is both a fashion design contest and a fashion show held annually at the Wildey Theater in downtown Edwardsville. This year’s theme was “Botanical Fashions in Nature” and featured many local boutiques and their models.

The event included a clothing design contest featuring local fashion designers who are either working with local boutiques or for themselves. After the contest, nine local clothing stores were invited to walk the runway and show off their merchandise and showcase the diversity within Edwardsville.

The show was emceed by Elizabeth Grant with her assistant emcee, August Range, a 7th grader at Liberty Middle School. Grant talked about what it was like to be backstage with the models before the show started.

“The energy and the vibe of the boutiques … is always fun before the event,” Grant said.

One of the event’s main goals is to showcase the diversity within Edwardsville. The runway models are all local to Edwardsville, but come from many different backgrounds and ages. The runway was full of people from kindergarten to adulthood.

The event started at 7 p.m. but at 6 p.m., a VIP dinner was served, hosted by local restaurants. VIPs also received a gift bag filled with products from local businesses. All audience members received a small theme-appropriate gift for coming to support the event.

Walker himself took part in the show by wearing a bowtie made of real flowers.

“Everyone in attendance gets a flower,” Walker said.

The event started off with guest singer Robert Phillips, a student at Lewis and Clark Community College, singing “Fly Me to the Moon.”

Up next was the fashion contest. Four local designers submitted their designs. First and second place were both awarded monetary awards.

First prize went to The Secret Gardeners, a local florist company. Their designs showcased the floral aspect of nature, with both dresses having full skirts made up entirely of a variety of flowers. The dresses were worn by Caroline Marcus, a student at Edwardsville High School, and Francesca Lantz, a preschooler who attends school at SIUE. Second prize went to Caidyn Crouch, a student at EHS. Her dresses featured flowers heavily as well, but with a simpler style skirt and corset design. Both designers used mainly organic materials to create their dresses.

The fashion show followed the contest. Nine local clothing boutiques walked the runway, with nearly 100 models total. One of the models, Lorena Abrams, who walked with Cassandra’s Closet, felt nervous about walking in the show and explained how she overcame that.

“I just tried to pretend like no one was watching,” Abrams said.

Hadley Willis, a kindergarten student at N. O. Nelson Elementary School in Roxana, Illinois, also walked with Cassandra’s Closet. Willis was very excited to be a part of the show.

“I loved getting up there and dancing,” Willis said.

The event is one of the main fundraising events for the Friends of the Wildey Theater. Walker said over the past eight years, $30,000 has been raised just through The Art of Fashion event.

Chris Head, the treasurer for Friends of the Wildey and main coordinator for the event, explained one of the reasons for hosting the event.

“Our main goal with fundraising is to bring back The Wildey to its original glory,” Head said.

According to Head, since the theater opened up years ago, the Friends of the Widley group has been able to remodel several parts of the theater, including the box office and the lighting outside the theater.