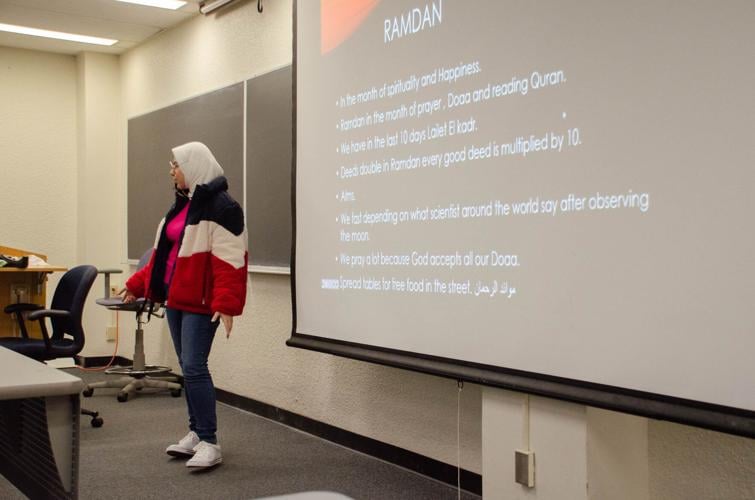 Ramadan is a time of community when many people participate in community service, including providing food for those who cannot afford it and spending time with friends and family. 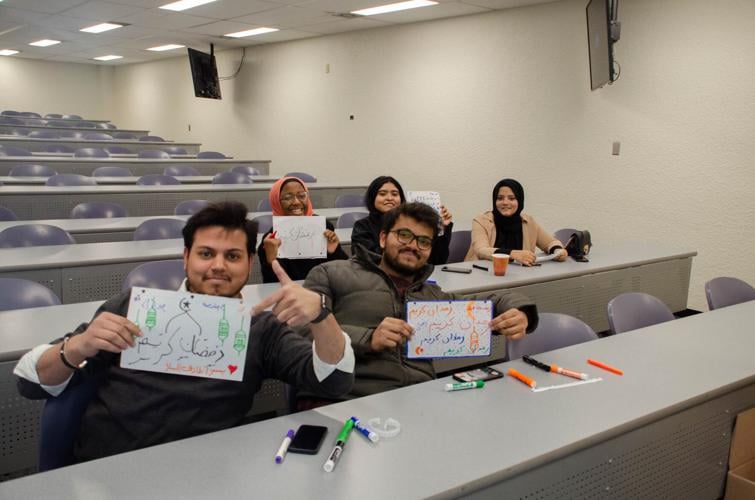 A group of students show off their works, several of which are decorated with traditional art, as well as their own names spelled out in Arabic. 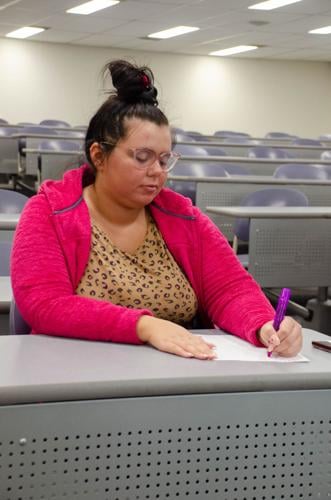 Aisha Dinceroglu works on the Arabic alphabet, practicing the letters before writing “Ramadan Kareem” in colorful markers to mimic its bright decorations.

Ramadan is a time of community when many people participate in community service, including providing food for those who cannot afford it and spending time with friends and family.

A group of students show off their works, several of which are decorated with traditional art, as well as their own names spelled out in Arabic.

Aisha Dinceroglu works on the Arabic alphabet, practicing the letters before writing “Ramadan Kareem” in colorful markers to mimic its bright decorations.

The Muslim Student Association is hosting a Fast-a-thon Dinner, where both Muslim and non-Muslim students are invited to break fast together.

During Ramadan, Muslims fast from dawn to dusk, consuming no food or water during daylight hours, and break their fast with Iftar, a meal at the end of the day.

Junior Rahmat Salau, an accounting major from Lagos, Nigeria, said the Fast-a-thon is an event that takes place on college campuses across the country. She said the idea behind the event is to help educate people about Ramadan and spread awareness about fasting.

“We encourage people in the community to try fasting with us for one day and then break their fast with us at the Iftar dinner at the end of the day. The idea is to educate people on why Muslims fast and [more on] our culture,” Salau said.

Salau said the event will include booths where people can learn more about Islamic culture. She said one of the main attractions is the henna booth. Henna is a type of temporary tattoo, as Muslims are not allowed to make permanent changes to their bodies, according to Salau.

“Across different cultures and different members of different countries, [henna is] something that all Muslims find in common, we do henna before any celebration,” Salau said.

Sophomore Rawan Hamed, an undeclared major from St. Louis, said that while Muslims fast from food and water, many also fast from music, negativity, or any pleasure that is not needed to survive.

“Maybe other people don’t have access to [those things]. In my opinion, [Ramadan] humbles me, and it makes me more grateful for the simple pleasures in life,” Hamed said.

Salau said the event will start before the meal is served, so the organization can host a Jeopardy-like quiz with Islamic trivia questions. She said there will be a speaker who will talk on the importance of Ramadan and how to take the lessons learned during Ramadan into the rest of the year, before praying prior to breaking fast.

“When it’s time to break our fast after sunset, we break our fast by drinking water and [eating] dates, just for a short period,” Salau said. “Then we pray before having our big meal, so that’s why our flyer says dinner starts at [8 p.m.] because that’s when we have an actual dinner.”

Junior Fareedah Balogun, a nursing major from Lagos, Nigeria, said that while many parts of Ramadan are the same around the world, the food is different among cultures, as well as how families gather to break their fast differs from place to place. Balogun said that she typically will eat a larger meal before sunrise, while Salau said she often eats more in the evening.

“It’s been a while since I celebrated Ramadan in my family but if I was with my family I would say my favorite part is definitely just waking up in the morning and just having that breakfast with everyone,” Balogun said.

Salau said she hopes the event showcases that Ramadan is not just a time of fasting, but a time to learn, a time to take a look at one’s life and where one may have fallen short.

“I just want to see everybody come together and have a good time and highlight the importance of Ramadan is not just to deprive ourselves, it is to curb ourselves from other vices,” Salau said. “It’s kind of a way where you’re supposed to be a good Muslim all the time, but during Ramadan, that’s when you really focus on bettering [yourself] for the whole year.”

Hamed said she looks forward to the holiday every year and finds it to be a very humbling period for her.

“You benefit from fasting because it humbles you, and it makes you more gracious [for everything],” Hamed said.

The Fast-a-thon will be from 6:30-8:30 p.m. on April 22 in the Student Fitness Center. The event is free and an RSVP can be made on GetInvolved.

Curious to know what the Islamic stance on LGBTQIA+ ideology is. Just making sure that students aren't being taught religions that "mask bigotry" such as Christianity.